What I am doing:  I have a flow that checks to see when a new item is put into a sharepoint.  This item is the result of an output from a separate application.  It will kick off a chain of events, that requires regular approval from a potential group of people.  Each approval will change the state and this only goes in one direction.

So far, I have gotten the 'watch for initial item' as well as 'approval in teams' and I even have the part of 'change state upon approval'.  What I need to wrap my head around is that depending on the type of item, the flow needs to parse a POC list and send the approval email/team message to the right person(s).

It was briefly explained to me, but I dont think I have it all.  The person suggested starting an array and making a POC variable.  Outside of that, I am not sure how the checker works.  Also, if i am going on a tangent that is overly complicated, I would love to make this much more streamlined and easier!  My current flow is below: 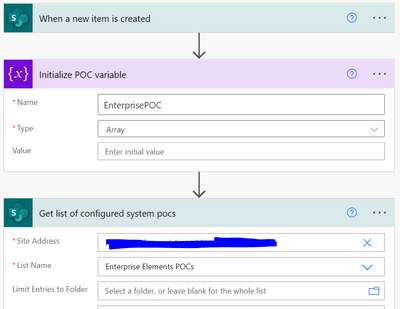 Not sure what to filter for, and then what to do after.  My friend suggested the below, which is an example of what he has done in the past:

From there, he used the 'systemPOC' output to populate the 'To' portion of the email.  From there, I got it, as I can include that also in the 'teams approval' part, no problem.