Is there a way to make option buttons disappear once clicked?

One of the issues with a chatbot is that the options are once chosen by the user still stays there. Users when clicks on the previously shown options, the workflow just gets disrupt and shows an error message. see below example: 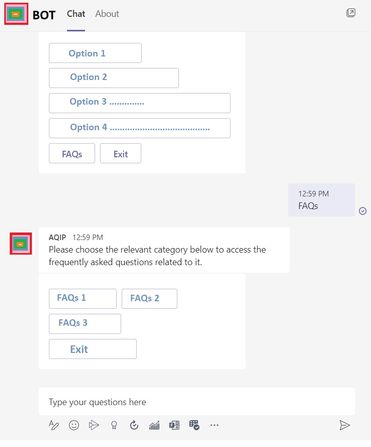 In the above example, the user first chooses "FAQs" and the bot then showed new options i.e. FAQs1, FAQs2 ..... But the user instead of choosing the new options clicked on the previously shown options e.g. Option 1.

Now I think there could be only two solutions to such an issue:

1. Either the PVA becomes so smart that it gets to know that the user has clicked on an option from another node and it runs that node closing the current node. OR

2. The chat screen just disappears the option buttons once a user clicks on them.

Can anyone help me in knowing if either of the above options is possible? If yes, how can I do it?

- I am using PVA for Teams

We have new updates from a duplicated topic here: Disable options of previous questions for PVA in T... - Power Platform Community (microsoft.com)

It's not possible to do it now, you can vote on my idea here: Disable options of previous questions for PVA bots - Power Platform Community (microsoft.com)

Also, you can try to use Adaptive Cards (a premium license is required).