I set up a standard Approval flow which has now changed its behaviour.

Formerly the flow sent an approval requst and when a response button was pressed it was processed in situ (the message 'working on it' displayed within the email body. The approval worked well.

This morning I ran a demonstration of the same approval, using the same data (literally nothing had changed). I got the 'working on it' message but then nothing. An error message displayed at the top of the approval request:

When I pressed a response button in the duplicate I was redirected to a Flow Approval site to complete the approval process.

I've tested again several times but this behaviour now seems to be consistent.

I also tried running a previous version of a custom approval - I got the same result.

I then developed a new approval workflow using 'Start and wait for an approval V2' - again the problem persists.

I have to wonder if this is something to do with licensing - does anyone know if approvals behaviour depends on which flow license you're operating under?

During development of the approval I've been acting as both requestor and approver such that the approval request email comes back to my inbox so that I can review its content, make sure all the links work etc.

I've now tested my broken approval using a willing colleague as the request recipient. The approval worked as expected under those conditions.

I'm still unsure why its behaviour changed in the first place so it still feels 'buggy' but at least I can move forward with a little more confidence.

Thank you for the notification. I've tested my problem workflows and can confirm that they now behave as expected. Hopefully this is a fixed issue and won't recur. It would be nice to know what actually happened.

I have just made some tests on my side, the issue you mentioned could not be reproduced. Both the two actions, previous and V2 are working properly.

I assume that it is a temporary error message happened that time. Will you still get the same issue when testing with your own email address?

Are you using Outlook Client or Outlook Web?

About “On scrolling down to the bottom of the request I saw that it had been duplicated further down”, I assume that it is the original message part. If you are using the latest version of Outlook, there are always two parts, actionable part and original part in an approval email message.

If you submit response from the original part, you will be directed to the Approval center to complete the response.

An image likes below for your reference. (Btw, I am using Outlook Web). 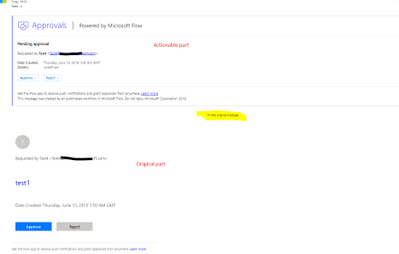 Please take another try with it, hope it is working for you smoothly.

Thank you for your reply, and for taking the time to reproduce the issue.

Unfortunately it still persists. I've tested the approval with several colleagues now. It works for them but will not cooperate when I address the approval request to myself.

I'm using office 365, outlook online. Our organisation uses primarily Microsoft solutions. I'm triggering the approval from a selected file in a SharePoint list. I can't supply images because the content is sensitive to the business.

I know that I've recently gone from the free license to a Flow-2 license. This is the only thing that's been changed.

From the following doc, we know that the HTTP 415 Unsupported Media Type client error response code indicates that the server refuses to accept the request because the payload format is in an unsupported format.

Could you check your email settings?

I will help involve more resource to look into this issue.

Yesterday all was working fine, today I'm receiving the "The remote endpoint returned an error (HTTP UnsupportedMediaType) Please try again later" message at top of approval email when clicking through Approve or Reject process. Nothing has changed since yesterday.

In order to approve or reject I have scrolled down the email to a new section which appears on error, so that i can approve via the flow approvals page.

I am building a new approval flow for a customer and I get the same result. I have not had this issue before. I use "Start and wait for an approval (V2)" with the Approval type "Approve/Reject - First to respond". I am using an item link to a file in a SharePoint Library and some field valued from that file. The approval works fine from the Flow Web app but not in Outlook Web.

Re: g the same Re: Approval behaviour has changed - duplication approval request

I am getting the same error exactly.

All was working on Thursday but the error started appearing yesterday (Sunday).

I'm also getting this issue. It worked 30 minutes ago.

Re: g the same Re: Approval behaviour has changed - duplication approval request

I have the same error