Assigning a Planner Task to a Guest User Using Flow

I created a flow to extract information input in a Microsoft Form and assign various Planner tasks based on the input.  For example, work requirement 1 is defined by the client and input on the form by an entry clerk, along with the appropriate internal employee the task should be assigned to.  When the form is submitted, Flow extracts the information, inputs it into the applicable Planner fields, and assigns the task to the applicable employee.  All works well for our normal O365 users, but the flow fails when it tries to assign a task to a guest user.  The following error is given: "Referenced User or Group (***@***.***) is not found."

The guest user is added as a guest in Azure AD, and tasks are able to be assigned manually to a guest user within Planner.  I have searched out this forum and found another user having the same problem but never received a resolution (see https://powerusers.microsoft.com/t5/Building-Flows/Planner-guest-task/m-p/339049#M36972).  As was suggested in that post, I tried getting the user ID from AD for the guest user but received the same error msg as the other user, "Resource '****_***.***' does not exist," though I was physically looking at the Azure AD entry for the guest user while the Flow was running.

I don't understand why Flow doesn't simply pass the data from Forms to Planner without trying to validate it, and even if it does need to validate it via Azure AD, why it's not seeing the Azure AD entry for the guest user.  I believe this is a bug that needs to be addressed by Microsoft. 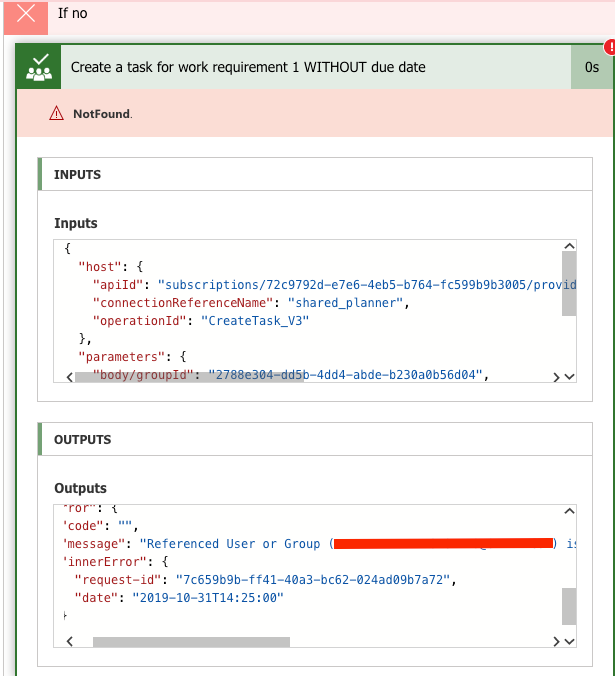 The assigned user id field should be the member's email of your organization if you are using the Planner connector, such as: name@tenant.onmicrosoft.com

I understand that, @v-litu-msft.  As I explained above, the flow works perfectly for licensed O365 users within my organization.  The problem is with guest users only.  There is even an Azure AD entry for the guest user (***********@gmail.com), but Flow doesn't find/recognize it when it runs.

I would also like to note that I have experienced the same bug and would like to know of any possible solution for this.

Thank you @JSizzle for reporting this.

@Jaco-Louis and all...I input a ticket regarding this issue to Microsoft Support and received a very helpful reply from a Microsoft engineer.  I just finished adapting the Flow information he sent me to our environment, and everything works perfectly, including assigning tasks to guest users.

As noted in the screenshot below that the engineer sent me, the key was to create an O365 group in Azure AD with all our employees, including the guest users.  Then use the "Get group members" Flow function for that group, and filter that group for the specific user you're looking for.  So for us, I setup the filter array to only create a task when the name of the user selected in the input form equals the display name of the user record in Azure AD.  You can also change this to accommodate e-mail address, first name, last name, or other fields available in Azure to make the comparison, but for our purposes I used display name and then changed the Azure AD records of the guests to the user's names. 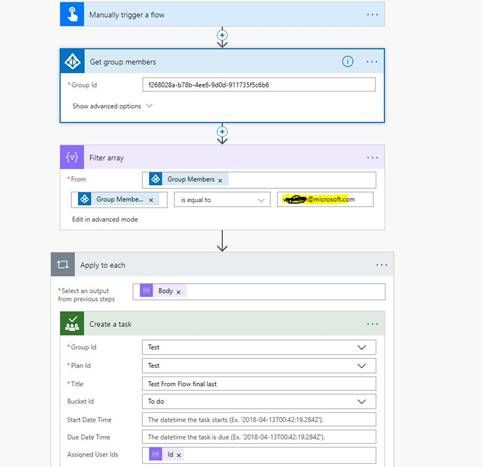 @JSizzleThank you for the work around.  With the help of our IT group I was able to test after they supplied me with a users id.

@v-litu-msftThis is still a bug.  This workaround requires that the owner of the flow have access to Azure AD.  This severely limits who can use this functionality.  In order for someone to be a member of a plan they need to be in Azure AD.  The create task step should be smart enough to look through the list of plan members and find the user based on email just like it does successfully for internal members.

This may seem like a small design flaw, but it has great implications for people who want collaborate with partners and customers.