I've discovered an interesting issue when you combine the use of Create SharePoint List Item in Flow and the Modern UI Events webpart. Here is the background to the issue:

This all works great, however, on one of the pages in the sharepoint site, I have a Modern Events webpart which is looking at the SharePoint event list where I created a new event in step 3. This webpart cannot display the events, even though they appear in the SharePoint calendar view. Now whats really really weird is that when I go to the event (in sharepoint) open it up and edit it without making any changes, the webpart now displays the event!

In order to test, I switched the flow from using the create item (SharePoint) block, to using the HTTP request block and supplying the field values directly to the API. The first time I did this I included the fields “Title”, “EventDate”, “EndDate” and “Location” (where I’m storing the ID of the Exchange event in case I need it later).

After running the request block successfully, I noticed that it was having the same issue (i.e. not appearing in the Events Web Part) so, frustrated, I opened and edited one of my test events (so that it would appear on the Web Part) and then examined it alongside a failed attempt through the API directly

As I described earlier, it appears that if you don’t pass a “fAllDayEvent” field, the api will set this automatically to “m:null="true", which is FINE for the API, but the Web Part apparently needs this in order to process the view

So passing “fAllDayEvent”: “false” in the JSON body of the REST API request sets the attribute correctly with the API and magically, the world is once again at piece.

It would appear (albeit as an assumption) that the “Create List Item” flow block doesn’t feel the need to set the fAllDayEvent field (there also isn’t a property value to set in the GUI). Probably this is because its creating a generic list item rather than an event item.

Anyhow, hope that this makes it to either someone who can fix it or someone that needs help!

Some screenshots would be better for understanding.

I am trying to reproduce this issue, please share more details on the flow.

The flow uses the above component connected to the shared mailbox account (which is used to authenticate) - i know that this is technically not a "shared mailbox" anymore, but until its supported officially, this works. 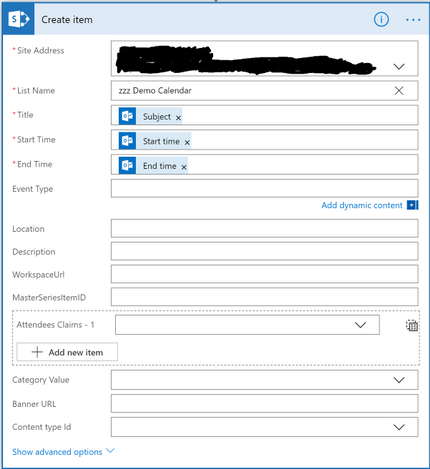 This flow will run fine, and the event in sharepoint will be created, however the event will not appear in the web part

and here is an example of one that doesn't appear:

one of the clear differences is between:

Hopefully this clears it up a bit.

I have made some research and test then I found that Event Web part requires the filed “All day event” to have a value, either true or false to show the event, which is blank when we initially create the event.

So we need to use action Send an HTTP request to SharePoint to update a value to the field, then the event will show up on the Events web part.

Here is a blog on how to set the All Day event field in Flow:

By the way, please share a URL of your flow, I will help collect and report this issue from my side.

Thanks for this, but as I said in my original post i've already switched to using the API to create the event. I just need someone to log this either with the SharePoint team.

Unfortunatly since i've updated my flow, theres no point in sharing the URL as it doesn't currently have the issue.

A URL of the flow would be helpful for us to check it on the backend. Anyway, I will help report this issue on my side.

Check out the announcement of Power Platform content at Microsoft Ignite!