Ok, this might be a deliberate feature, but (1) it is not documented in the connector's documentation, (2) I don't see a way to circumvent it in order to be able to handle larger groups in a larger organization.

If some technology limits returning a large arrray, I'd add a filter feature to the Action.

Anonymous
Not applicable
In response to katonage

@katonageNo, right on the front of an action there's an option to show advanced options.

Do you have more than 100 members in your group while flow only returns 100 members?

When create the flow using the action “Azure AD – Get group members”, I don’t find a way to set the maximum return value. I will help confirm this from my side and back to you if I got any response.

katonage
Advocate V
Exactly, I had some 130 members of the group and I found out I was just missing the last 30 from my output. I tried to create a for each to process all employees of the company.

any update on this matter?

I have some updates for you.

Please try to add the following line into the “Azure AD – Get group members” from the code view. 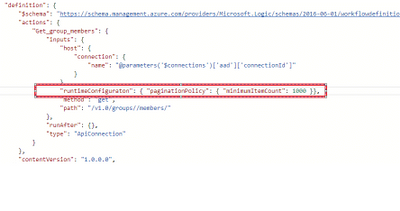 Has anyone has success with this method? I cannot get it to work.

Seems nice,but I dont see how I get to this text/code view: should I edit the exported zip or json and then import?

How do you get to code view? There doesn't seem to be an option anywhere.

I guess colleague exports the flow to the Azure Logic Apps, where you can get this code edit straight away.

However that's workaround only for those who have Azure subscription. Unacceptable in my opinion.

The output list of this step is limited to 100 entries.

I tried to add

directly in the zip package and then re-import it again into FLOW but it didn't work (some errors were thrown during the import, I guess the package signature is broken by direct modification)

Edit: Then I did the same in the Azure Logic Apps, but it didn't work with "Outlook Groups" connector.

I cannot evaluate it on Azure AD connector which requires administrative privilleges to be used. It is rather won't accessible for casual engineer. 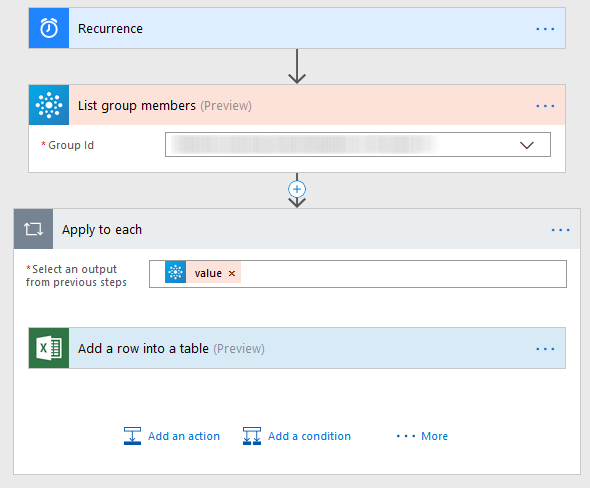 That's the serious limitation of the entire service and I would treat it as a bug. Does anyone reported it ?

Folks have problem reproducing your suggestion. Could you pease elaborate on it?