"Specified dates cannot be in the future." error on creation of new tasks.

The "Specified dates cannot be in the future" error occurred while trying to auto-generate tasks in Azure DevOps through MS Flow. 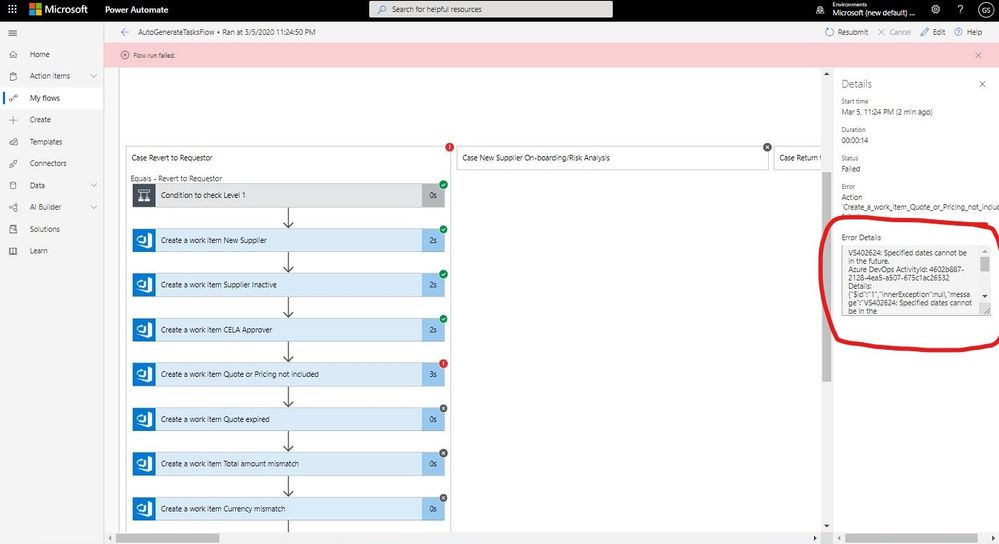 We are trying to generate multiple tasks under a User Story, some of the tasks get generated and the code fails in the middle throwing the above error. The occurrence of the error is random,i.e., the flow works fine sometimes and all tasks are generated, other times it fails on generation of the first task itself. We have tried using REST APIs through .NET core application to generate tasks but it is throwing the same error. We even tried adding a delay in between two task generation execution but we are facing the same issue.

As you mentioned the flow in South India works fine but not in Central US.

Can you please check whether the error has something to do with time zone?

Thanks for your response. We have changed the region of organization to South India but the error still persists. Can you please suggest an alternate solution?

@Gauri_Shingane : Based on the error message it looks like the action was expecting a past date, however a future date is passed as a parameter which is causing the error. Please check whether an appropriate date is passed.

If you are sure that a valid date is passed and the flow is still failing, please open a support ticket with us and we will be able to assist you further.