Hey guys,
we are currently on a project built in PowerApps, which is connected to dataverse.
The source-data is in a sharepointlist. Those data are transformed in a dataflow and saved in the dataverse. Addinially we have tables in the dataverse. We have several reports connected, some of them around 7.000 raws & 30 columns long.

We are facing some perfomance issues, which happen not always, but from time to time.

a) We realized some checkboxes

which are programmed with the patch-funcion in combination with the Lookup-function.
By checking the checkboxes, the status on the screen itself got saved (& the loading dots were appearing), but another screen, which is connected to the tables storing the Checked/Unchecked information did not get an update for over 1,5 hours.

We tried as well on another computer, in which it beaved the same way.
After a certain time the issue dissappeared, the saving & displaying worked fine again.

We are asking ourselfs: Is that an issue with the performance of the dataverse or can the problem be based in the programming of our app (but why does it happen only from time to time/ inconsistelntly)?

Today I´ve seen that in the app the loading dots were appearing when a user was saving three other data-items (independent from the issue just discribed). The saving appeared to have no effect in the other screens (in which a flag is shown as result of the saving). After two minutes of doing other tasks in the app and redoing the process, the saving could be executed successfully.

Would be great if you could share your insights about the performance-limitations of the dataverse and possible settings we could influence - or might there be the need to do an update on the "dataverseperformance", as you can do on hosted webservices?
I´ve seen this post regarding possible settings for the location of the server, etc. - but might there bere other settings/ suggestions from your side?
Thank you for your help.
Best regards,
Alexander

Hello, @AgileAlex , I am not aware of any performance limitation issue in the Dataverse, so this can be programming technique and functions structure. One way to check your app for any performance related issues or potential warning, is from the PowerApps: 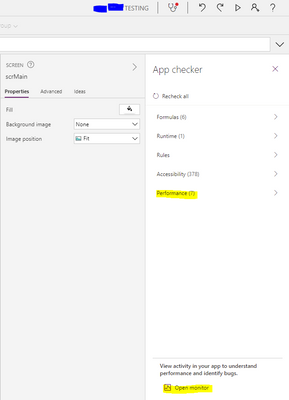 Also, you can monitor your app on run time and say what exactly taking longer time and resources.

One last thing, there are features on preview that will enhance the data query to your app:

Make sure they are enabled. 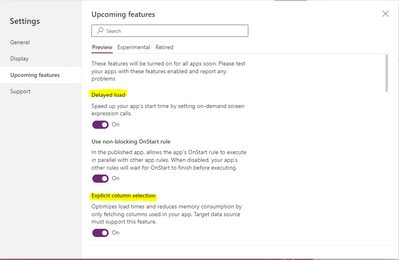 Regards,
Ahmed
If my reply helped you, please give a 👍. And if it has solved your issue, please consider Accepting it as the Solution to help other members of the community find it more.