5 Things I Learned By Making A PowerApps Game

I am going to make a bold statement.

"My name is Matthew Devaney and I believe taking the time to make your own game is one of the best PowerApps learning experiences you can ever have."

There, I said it.

PowerApps is a platform used by serious people for building Serious Business Apps (tm) that save serious time and $$$.  So why bother to make a game?   Brian Dang who is well-known game-maker in the PowerApps community put it best:

Still not convinced?  Take a look at these 5 things I learned by making Crossword Countdown: A PowerApps Word Game.

The concept for Crossword Countdown is quite simple: score as many points as you can by making words before time runs out.  Tiles showing letters are placed on a 4x4 grid and words are made by selecting connected tiles in any direction.  If you want to see how the game plays you can watch this short video.

The player travels through several different "screens" while in the app: the title screen, the gameplay screen, the game over screen and several menus.  I wanted to re-use several common controls on each screen such as the background, buttons and menus.  Rather than have 6 screens I opted to make only 1 screen in PowerApps and show/hide the control based on a variable that tells the game which "screen" it is on.

For example the "How To Play" button has this code in the Visible property because it appears on two screens.

The picture below shows all 6 "screens" built on 1 PowerApps screen.  See if you can guess which other controls I re-used. 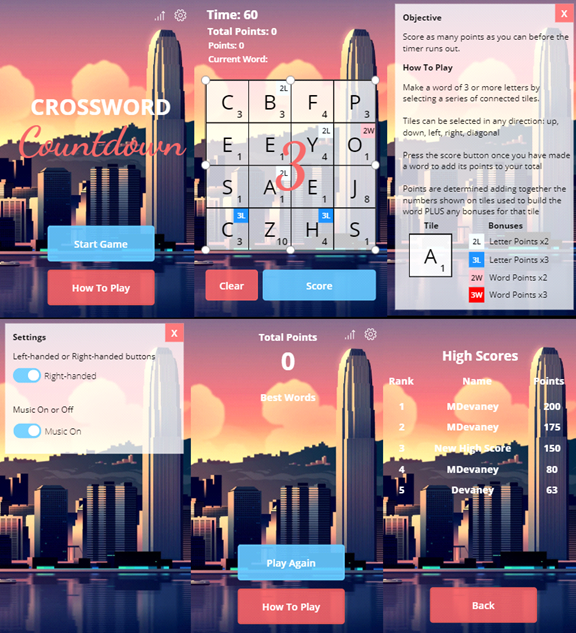 Each of the game tiles shows a letter from the alphabet.  To create the alphabet I wrote one line of code that stores it in a collection.

Then the order the letters are drawn and placed on the game grid can be randomized like this.

Every word the player makes must be checked against a dictionary of valid words before awarding any points.  I wanted to store the dictionary on the player's mobile device so they could play offline.  PowerApps allows makers to directly import data from Excel files located on their computer.  The limitation is any changes made to the file located on the computer will not be updated in the PowerApp.  A dictionary is a perfect use case for this feature because there is no need to change anything once it is loaded.

Add the data source by using the "Import from Excel" connector.  Then select all the tables you want to import from the Excel sheet.  Each table cannot be more than 15,000 lines. 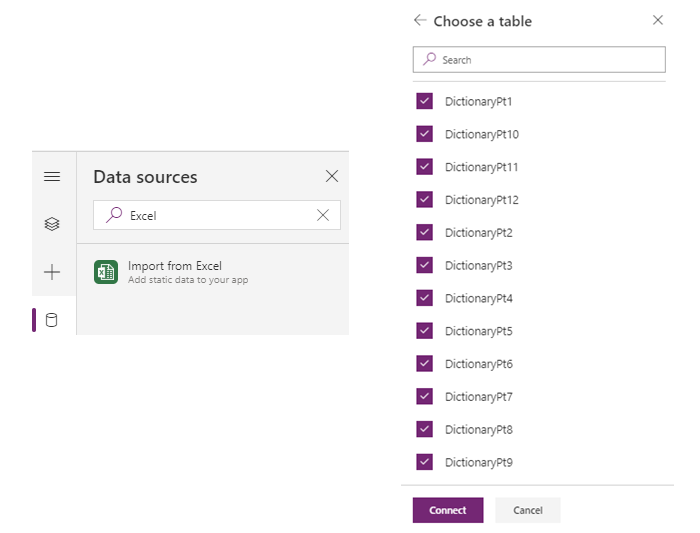 Finally, make a collection to hold the entire dictionary.  You might have thought that a collection could only hold 2,000 rows but mine has 170,000 rows.  This is possible because data stored on the device is not subject to delegation limits.

All of the game tiles on the game grid look and behave similarly.  This makes the game tiles an excellent candidate to become a component.  However, each game tile needs to show an different letter, value and bonus.

I used a collection called wordGrid to store information about the game tiles. 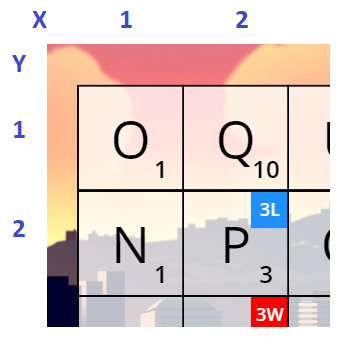 Each game tile component has input properties called GridXPosition and GridYPosition.  For the tile showing letter "Q" these would be filled in as shown below to match its co-ordinate location on the game grid.

Lastly, I used these formulas in each game tile to lookup the data from the collection.

#5  Save Data Offline To A Mobile Device

Attempting to get a new high score gives the player motivation to continue the game.  I needed to save the high score list directly to the player's mobile device because my game is meant to be played offline.  Doing this was very simple and only required three lines of code.

I put this code in the Submit Name button on the "New High Score screen" to update the collection holding high scores and Save it to the mobile device.

Then I put this code in the OnStart property of the app so the high scores are loaded when the app is opened.  The technique will successfully retrieve the saved data even when PowerApps is closed or the device is shut off. 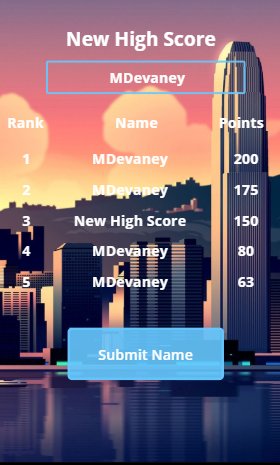 Matthew Devaney is the creator of Crossword Countdown: A PowerApps Word Game.  Download it for FREE on the Community App Samples Gallery. 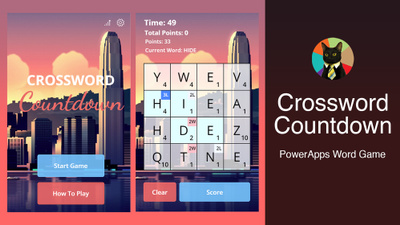 This article has so many good elements to it.

The element I used was the loading of Data from Excel.

This created a different thought pattern for me to use in future apps.