Save publish it. The app loaded fine. Can you please share session Id for app playing session?

Also if you could send me your msapp (direct message me) which has the issue then that would help with reproing the issue as well.

Will do - was in the process of rolling back my version after attempting again. Messaging you shortly.

Same is happening here. PowerApps keeps defaulting me to 3.22091.11, but even saving it under later versions gives me the hanging issue.

I wish I'd read this earlier. I tried updating two of my apps to the latest version and experimenting with a named formula. All seemed good so I published. Now both apps are basically non-functional. Rolling back to a previous version works sometimes. Tried version 3.22092.19 to see if that made a difference but nope, both apps dead on launch.

For me, even disabling Named Formulas didn't get the app working again.

3.22091.11 seems to be a dodgy version - it doesn't feature in the list of available versions, but if I enabled Named Formulas, it reverted to that version and failed to start.

The fix for named formula issue is not deployed in all regions. But it will be by the end of next week.

Advocate IV
In response to ShantanuP

Do I understand correctly that the versions 22091.23 and 22092.19 can be selected under Settings, but may not yet be installed in the tenant?

It was premature of me and a mistake to mark this issue as currently resolved.
It is currently not stable to use versions 22091.23 or 22092.19, as reopening the app in Studio often resets the version to the not quite flowless 22091.11, even though this version obviously no longer exists. 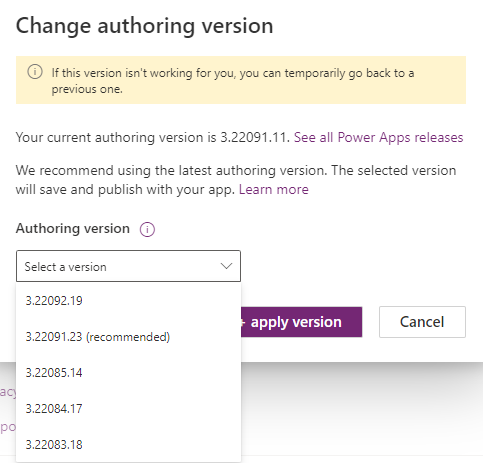 I currently advise against enabling Named Features in an existing app, as there are reports that it is sometimes not possible to disable the functionality again without problems.
If you absolutely want to test the functionality at this point, you should create a completely new app, which can be deleted again very easily.

- Of course, all this is just my opinion as a user -

We have identified the issue where disabling the feature also breaks the app and working on fixing this. Following work around should work in these cases until then.

- Add following named formula (You can add additional ones and use them in the app if you want.)

- Save and publish the app.

Kudo Collector
In response to ShantanuP

Not sure this fixes anything for me unfortunately. I've followed your steps and the app still won't open, just sits on the spinning loading icon but never actually loads. Version still showing as 3.22091.11. I did notice a new 3.22094.7 available so tried that, but no difference, except it now stripped the background colour from the app icon and also crashed whenever I try and refresh the component library, so things are going great!

Edit: I tried creating a blank new app and the code did prevent it from crashing. So it's just my existing apps that it hasn't helped.