Activation extended transition period for existing connectors that got reclassified as premium?

I have logged a support call with Microsoft for this, but they asked me to make a post on here so that the backend Power Platform team could take it up.

We are an ERP implementation partner that made a Power App for a customer using the NAV connector. This customer has a license for Office 365, which also gave them access to Power Apps.

We were made aware of licensing changes in October in the Microsoft Power Apps and Power Automate use rights for Office 365 applications and based us on the FAQ page of PowerApps (https://docs.microsoft.com/en-us/power-platform/admin/powerapps-flow-licensing-faq). On this page, it says the following:

In addition, apps and flows created prior to October 1, 2019 which are using these connectors will receive an extended transition period until October 1, 2024. During this time, these qualifying apps and flows will be exempt from the Premium connector licensing requirements for the reclassified connectors.

The Power App and NAV connection used at our customer were created in 2018, so from the information in the FAQ, we assumed that this connector would automatically receive the extended transition period until October 1, 2024.

A Microsoft Support engineer has made us aware of the message in the message center and there it says to contact Microsoft Support before December 31, 2019 to extend the current licensing terms until October 1, 2020. This wasn’t in the FAQ, which is why we didn’t make a support request for an extension. Next to that, it doesn’t say anything about the extended transition period for existing connectors until October 1, 2024.

Many thanks in advance. 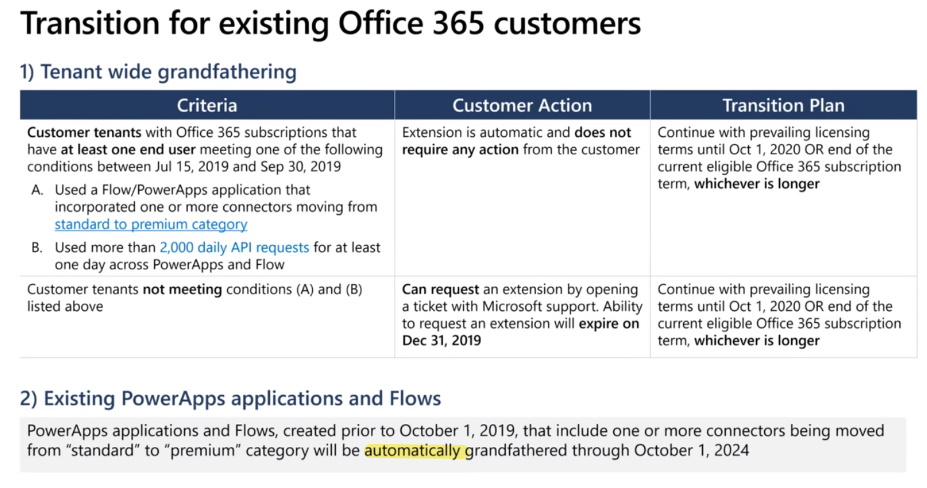 These apps and flows will automatically be grandfathered through October 1, 2024. No need to do anything.

The only existing connectors that were extended to Oct 1, 2024 were the Azure SQL connectors.  That 5 year extension didn't cover NAV to the best of my knowledge.  The NAV extension was only for one year until Oct. 1, 2020.

These apps and flows will automatically be grandfathered through October 1, 2024. No need to do anything.

Thank you for the confirmation. We were just confused because PowerApps keeps asking for starting a trial, but if I delete the activated trial, they seem to still be able to use the app, so I guess the app has been grandfathered.

The users have been using the app and they still keep getting a screen to extend the trial for PowerApps. When opening the app, they get redirected to the following URL:

They've also gotten a mail to renew their license. The app only connects to NAV and Sharepoint, and was created on 9/6/2018, 12:24:17 PM, so should have been grandfathered. Is there anything we can do to resolve this?