The story is as follows:

I have taken over looking after a PowerApps instance, and starting off, there were four provisioned PowerApps environments.  One of the environments needs to be scrapped and re-created, so I deleted this environment.  I then tried to create a new environment and have been presented with the following error: 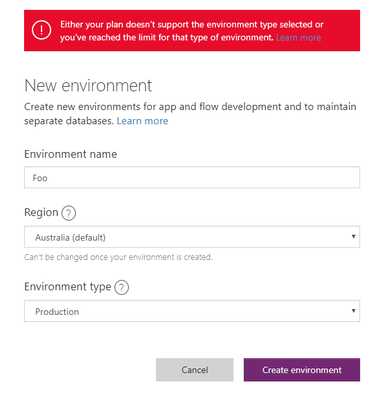 I have also confirmed that from a licensing point of view, I should be allowed to create Production environments, in particular, I've confirmed that the "Dynamics 365 Customer Engagement Plan Enterprise Edition" covers production PowerApps facilities.

What could be the problem?

Each user with a PowerApps Plan 2 license (which you have through your D365 Enterprise plan) can create up to 2 Production environments - this has ben a restriction we've had ever since we launched back in 2016, however we started to enforce this earlier this Spring.

The error below indicates that you have already created 2 production environments with that account.

NOTE: if you are over the limit we will not delete any of your environments, but you wil be restricted going forward.

Thank you @jo, this explains alot!  We have a need for more than two environments (specifically, Dev, QAT, Pre-prod and Prod).  Would the best way to handle this situation be to create two users, one corresponding to a non-prod "area" (containing Dev and QAT instances) and one correpsonding to a prod area (containing Pre-prod and Prod)?  We are really only using PowerApps in this case in order to have working Dynamics Talent instances; I believe that there is the same restriction in respect of Talent instances as well.

You are correct that you would need to create the other environments using another user account.