Enabling PowerApps across a tenant

I am preparing to enable PowerApps for a tenant with around 50K users. All users will have a PowerApps Office 365 E3 license. It is my understanding that the E3 license PowerApps license will have limitations such as:

I have noticed some user have already been testing with model-driven apps.

How are people creating model-driven apps with a PowerApps E3 license? Can you create them, but just can't run them?

Why am I seeing everyone's apps? even though I am not an owner. I have checked other users and they to are seeing the same.

If people sign up for a free trial then they can create all those things that a regular Office license can't.  When the trial expires they will be prompted to buy a license or all those things will stop working.  You are seeing the apps either because they have shared them with you or they are using your credentials to login to Power Apps.

These apps have been created using an E3 PowerApps license. I have gave a small number of POC users a PowerApps O365 E3 license. We have taken measures is prevent anyone attaining a trial license on our O365 tenant, so I know they didn't create them with a trial license.

I know these apps have not been created using my credentials. When I click on them I get a message telling me i do not have access.

They were created by someone with a premium license.  There is no other way to create a model driven app.  You can export a list of users and the licenses assigned to them from the Power Apps or Flow Admin centers.

Hey, I thought I would provide an example of the behavior I am seeing.

I have confirmed from the "User licenses" report in power apps and also our O365 admin center that the user does not have any premium licenses or trials. The user has an O365 PowerApps E3 license only. 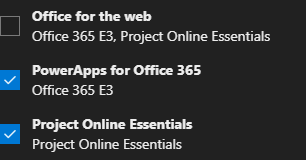 From within make.powerapps they are able to create a model driven app.

They then gets brought to the App Designer. I have not yet tested if he can publish a model driven app.

Back in his "Apps" within make.powerapps the app he just created, which is in progress and has not been published, is now visible to everyone in our organization 50K+ people who are not licensed to create model driven apps. As you can also see this user can also see all the other model driven apps where people, who only have an E3 O365 PowerApps license, have done the exact same.

I would open a support ticket.  This is not normal or expected behavior.  Something isn't registering correctly in your tenant and needs to be fixed.

Does anyone in your tenant have any kind of Dynamics 365 license?  That could throw this off also.