Hello, I've tried setting up the onboarding template, however I don't see any opportunity (or documentation) to assign an Excel file in which to save the data for the app. Therefore, once I install and publish it, it looks great! Even embeds into Microsoft Teams, which is what I'm trying to do--however, whenever I make changes (like Company Name) it always reverts back to the default.

Am I missing a step during installation? Is there better documentation somewhere?

That's strange that no file is created. I've re-created the template and downloaded the default Excel sheet that should have been created. Go ahead and download it from this comment and upload it to your OneDrive for Business. You should then be able to add it as a Data Source successfully.

NOTE: For some God awful reason, there are hidden Hyperlinks in a LOT of the sheets that take you to the National Weather website. You'll have to delete many rows of hidden nonsense data.

To answer your first question, the "Administrators_1" and similar are the headers from the Excel file, so once you've successfully added the Excel sheet as a Data source you will be able to edit them as I have described above.

And for your second question, after uploading the attached template file and connecting it following the steps in the previous message I posted, you will be able to edit the "FAQ" header in the Excel sheet at anytime and it will update the app.

Your data sources screen should look something like this once done:

Let me know if you still have any issues or other questions!

That's weird! The Excel sheet should be saved in your OneDrive for Business folder for the account you are using when you first click "Make my own app" button on the banner when opening the On Boarding Template.

The default location is usually "Files > PowerApps > Templates" and there will be a folder called "OnboardingTasks_[Unique ID]":

Hi,
Thank you very much for taking the time and be so precise with your answers. Reading back, I can see the process was much simplier and i was drowing in an ocean of questions because of lacking the excel file.

I repeated the proces again, creating an app of my own using the template as origin. This time, it worked! The excel is saved in the folder.
Because I had done quite a few hours of formating on my original app, I moved the file to our company directory, created new connections via OneDrive on my original app, selecting the excel file I created in the second try.
Then, I followed your steps to change the app code replacing the strings by Administrator_1 etc.. It worked!

I had to remove all those Bing and Weather webpage links, which I also noticed. And had to fix plenty of errors in the formulas that appeared for some reason. If I edit the app the changes on the text won't save in the excel file, so i am editing all texts in the file, and formating from the app.

Also, I struggle with a recurrent error. Something about the manager and the user.Id, and also about photometadata. Well, i solved them as follows:

@Sveeramachaneni , have you with test it already with your endusers? I have, and what happens is that they do not get the option to grant permission to the "Tasks" connector, therefore, they do not get the list of tasks or the progress moving. I have tried to give access through Azure AD, following this other posts instructions, but I do not get that app with the code ID they give ( app ID 99da6bf4-4525-4bfa-b39f-b6a35789c240 you are suposed to find OutlookTasksConnector-PowerApps and Flow, but instead I only find a different one: "PowerApps and Flow").
And I cannot give it User consent for the entire organization.

I am not IT, so this is getting very complicated. It was supposed to be an easy peasy task, take the template, change the text, and go. Oh my....

Don't give up! I think you're really close. Make sure the 3 below Data Sources are added as they are very important.

After adding them, save and close the app and relaunch. It should work then. 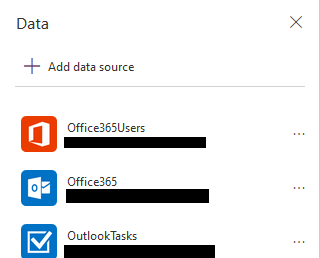 I removed any and all ways for users to edit the app using the app itself. Any changes are made using the backend Excel sheet (which I call the "database" to my admin users that actually fill out the various tasks.)

You shouldn't need to edit anything in Azure AD. Let me know if adding the 3 sources still doesn't work and we can troubleshoot deeper.

Thanks a lot for the support. This is taking too long time, really appreciated.

In Azure I had to fill in the profiles of the users, as when they do not have a manager assigned, an error occurs.

Also, I was trying to give globlal permission to the "Tasks" connector.

I have those connections you show me in your previous response. For me it worked when opening the app, and gave me the chance to sign in to give permissions straight away, but for my users it does not. Reason why I tried to force it via Azure Enterprise apps. But it does not show the connector in there, therefore they keep not having the Tasks connection active, and the app cannot create the list of tasks in their outlook.

In regards to retrieving data from the excel file, if the file was stored in Sharepoint it won't be a problem. But connections to sharepoint are limited to tables, and I would like to connect the app to the excel file. This means, that I have to do it via OneDrive (correct me if I am wrong). Problem with OneDrive for bussiness is that it is a user account. I will need to share one by one people on my organization to have access to the file, and it will be very annoying to do it every time a new colleague gets onboard. I can see, lot's of people are having this issue (Post here). How did you share it across the entire company using OneDrive? Or did you store it differently?

I can share it to all existing users in the organization, but then, do I need to remember to invite the new ones, one by one? Cannot be the right way. 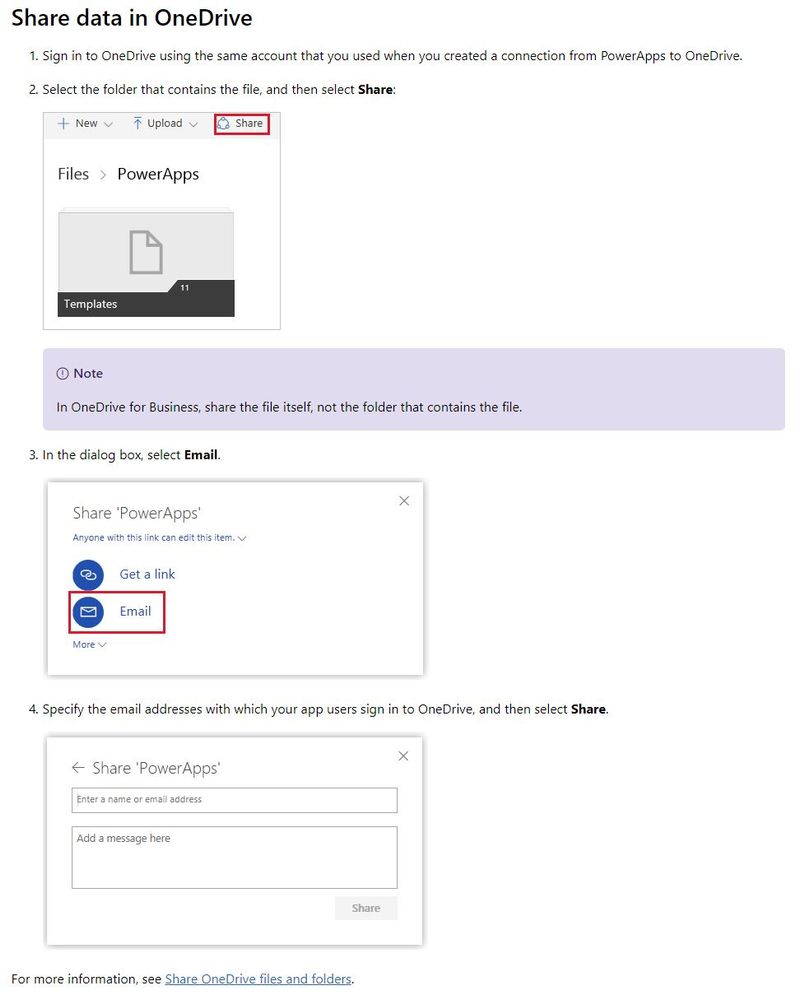 Maybe this is considered a new topic, but in case you have dealt with before.

I have created a section for the users to fill in some texts to be publish on their social media introduction. I would like those texts to be saved into the "database" excel file too, but stored always under just one row. I mean, that if they edit the text a second time, this will replace the original text, and so on. Rather than generating a new entry on the table. Does it have sense? So far, the excel only keeps data to update the app content, but I would like it to keep also the entries filled in by the app users (some sort of form), so that the HR responsible can see the user responses and use the content from the excel file.

Does it have sense? Is this a complex tasks to achieve? Couldn't find any post in this regards. It is only for exporting data, but cannot see how to do, so that there is a unique row per user that updates when the user updates via dthe app too.

I just want to say you were godsend with this issue, and it's working for me! I followed all your advice, and was able to get it to update from the spreadsheet. I have something to add that I think you all will find very helpful.

I was able to get the app to save to the Excel back-end by adding the following code to every "Save" button:

Where there is the "Patch()" function, I changed the Source to the "OneDrive" source rather than the Collection.

I hope you find this useful!