Skip to main content
Go To
Turn on suggestions
Auto-suggest helps you quickly narrow down your search results by suggesting possible matches as you type.
Showing results for
Search instead for
Did you mean:
Idea Options
18 Kudos
Vote

I build canvas apps almost exclusively, because I like to have more control over the appearance and behaviour of all my objects. This invariably leads to having many, many objects on each screen, which I then organize into groups (see screenshot below). I often encounter a situation where I want to add a new object to an existing group. In this example, I created the gallery object galDetailAtt, and I want to add it to the group grpDetailAtt. It would be nice to have an option in the contextual menu that will add the object to one of the groups. Currently, the only way to add an object to a group is to ungroup the objects, then regroup them with the new object, which can be very tiresome when dealing with a large number of objects. 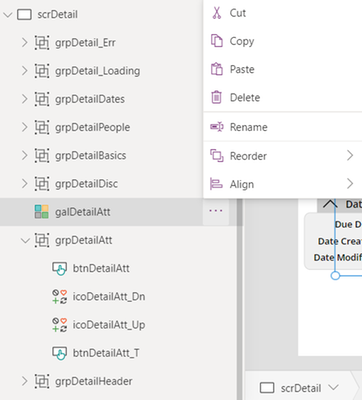 Losing a name is not the bad thing.

The bad thing is that you also lose all the properties for the group. Visible, OnSelect, etc.

I think it is necessary to be able to append new items to the group without losing all the settings.

The current situation is an unnecessary workflow interruption that the interface should be taking care of.