I have created a web form with 3 steps based on account entity's tabs.

In the second step I have a custom tab based on web resource which doesn't work in web form.

Has any workaround how can I make second step workable?

If web resource doesn't work can I add page template? I have seen page can be added with redirect option but I don't need redirect.

And also how can I set latitude and longitude for account entity using liquid syntax and save on the second step?

No, there isn't a liquid object for the webform steps that I'm aware of.

You could consider setting a global variable in the Custom JavaScript section of the Web Form Step and reference that in the Web Template. E.g.

Why doesn't the web resource work? Is it an issue of the iframe itself? If so, you could attempt to to use the "Render Web Resources Inline" option to have the code placed directly into the HTML instead of an iframe. 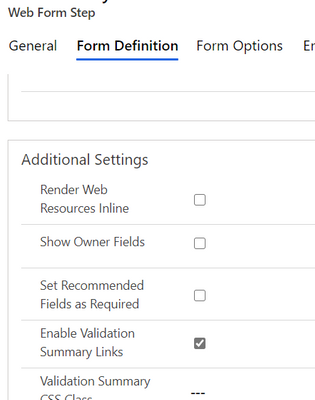 Additionally, Liquid cannot be used to make an update. Liquid is a pre-rendering template language only. If the data exists already, you can retrieve it using liquid and put it in input fields to grab with JS, but if it's data you're entering in Step 2 in order to save to the Account entity itself, you'll have to continue your current path.

Example of storing the latitude/longitude if it exists on load of step 2:

You would now have a global object to retrieve the hidden lat/long from.

Helper I
In response to justinburch

Thank you for your reply.

Since template can't be embedded inside webform step so is it possible to detect steps inside template or page if I embed webform there.

I have 4 steps. In my step 3 I want to add html code which will render the map. Now I want to detect step 3 so that I can integrate my map's html code under that step. For example:

It seems that I can detect step from query string through the url but I don't want to make hard condition with hard code step GUID id.  Is it possible with liquid code following best practice so that my code can work in any environment?

No, there isn't a liquid object for the webform steps that I'm aware of.

You could consider setting a global variable in the Custom JavaScript section of the Web Form Step and reference that in the Web Template. E.g.

Helper I
In response to justinburch

Thanks a lot for your such valuable responses.

I am facing an issue like when I edit any page using Portal Studio Editor instead of Portal Management then if I have any div with id attribute like:

when I save the page the id attribute is being removed and my content saved as:

not sure why id="map" is getting removed. Do you have any idea?

"id" need to have in div to load the map.

and also how to get the web form step submit button event? I want to add record into my custom entity when submit button is clicked.