I've implemented a PCF Control for an Optionset attribute: https://github.com/ORBISAG/ORBIS.PCF.ColorfulOptionset

I try to use it in a CanvasApp. I've imported the Control in my CanvasApp and I've seen that for the bounded property that I've defined in the manifest  (optionsInput)

I've figured out how to fill the options (by setting optionsInput_Options using Choices function).

But I don't know how to set the value for optionsInput.

So my PCF control gets all the options

BUT the value is always empty.

This is my CanvasApp designer: 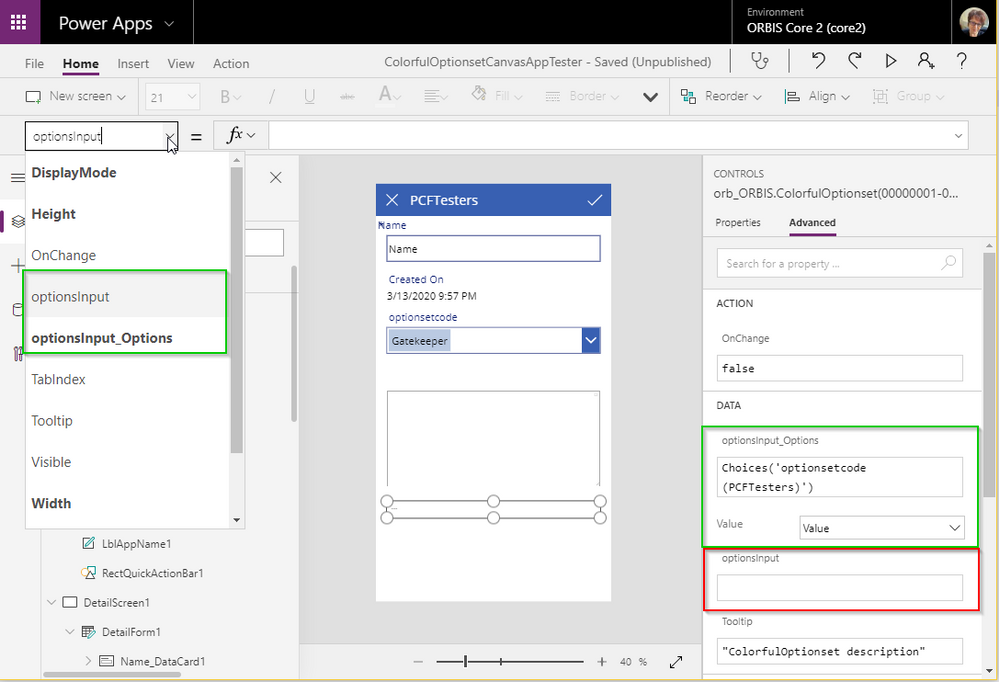 Do you want to specify a value within this OptionSet PCF control through the optionsInput property?

Does the PCF control work well after you specified the Choices formula for the optionsInput_Options property?

If you want to set a default value within this OptionSet PCF control through the optionsInput property, please consider take a try with the following workaround:

Set the optionsInput property of the OptionSet PCF control in your app to following:

In addition, the Option Set type field provides a set of options. Each option has a number value and label. When added to a form, this field displays a control for users to select only one option. If above formula could not work, please apply the same Choices formula into the optionsInput property.

Set the optionsInput property of the OptionSet PCF control in your app to following:

Unfortunately I don't get it to work.

I get all available options passed to my PCF control. It works through setting the optionsInput_Options on

When I remove that, I don't get to see any option in my dropdown anymore.

It doesn't work it I set the this Choices... Formula to the optionsInput

What is missing, is a way to tell my control which value was chosen. I've added the same attribute again on the form by using the standard control (optionsetcode). There you can see on the screenshot that the "Gatekeeper" value is shown as soon I open the form. How can I tell my PCF control which value has to be shown/chosen from the list?

The first solution proposal was not accepted by the from designer.

but it had no effect.

When I work with a text area control, I could set the input property value by using

So I thought for the optionset PCF should be something like

but unfortunately that is not even accepted by the designer.😞

This appears to be a recent regression in this functionality. We are tracking it internally with priority by internal bug ID 1751868 and hope to have it fixed quickly.