Ability to initialize and utilize MODI OCR engine will be removed in desktop flows starting from  the July release of Power Automate Desktop.

Actions required by you: If you are using the MODI OCR engine in your desktop flow, kindly  remove the create MODI OCR engine action and replace it with the Tesseract engine as  explained below. Please note that changing the OCR engine might cause the OCR actions to  fail, thus it is highly recommended to test the actions before moving the desktop flow to  production.

This action will be removed from the actions list in the August release of Power Automate Desktop. This is done to reduce an additional step of always initializing Tesseract OCR engine before being able to use in your desktop flow. This redundant separate action will be removed and now users can directly initialize the Tesseract OCR engine when it is being used. Having this ability also allows the desktop recorder to use OCR engine actions to extract text from images.

Actions required by you: If you are using Create Tesseract OCR engine action in your desktop flow, kindly remove that action and directly initialize the Tesseract engine in the OCR related actions where the engine instance is used.

Like in the example below, previously a separate action had to be used to create a new instance of the Tesseract OCR engine and then the output OCR engine instance variable was used in other OCR related actions. 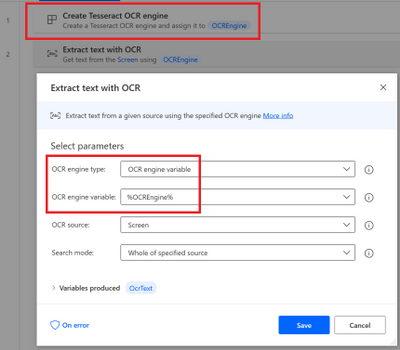 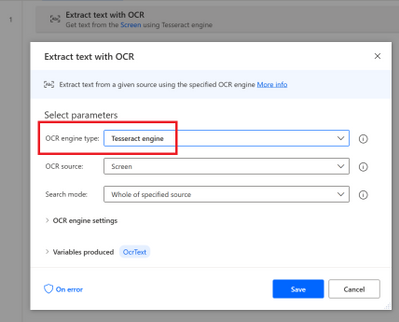 Other available alternatives for text recognition: