Last month in my spare time, I created a Flow that:

I'm working to extend this Flow, with:

Provisioning SharePoint sites and applying PnP templates was a little bit more complex than provisioning Office 365 groups from Microsoft Flow and you will see why in a couple of minutes.

The high level view of the flow looks like this : 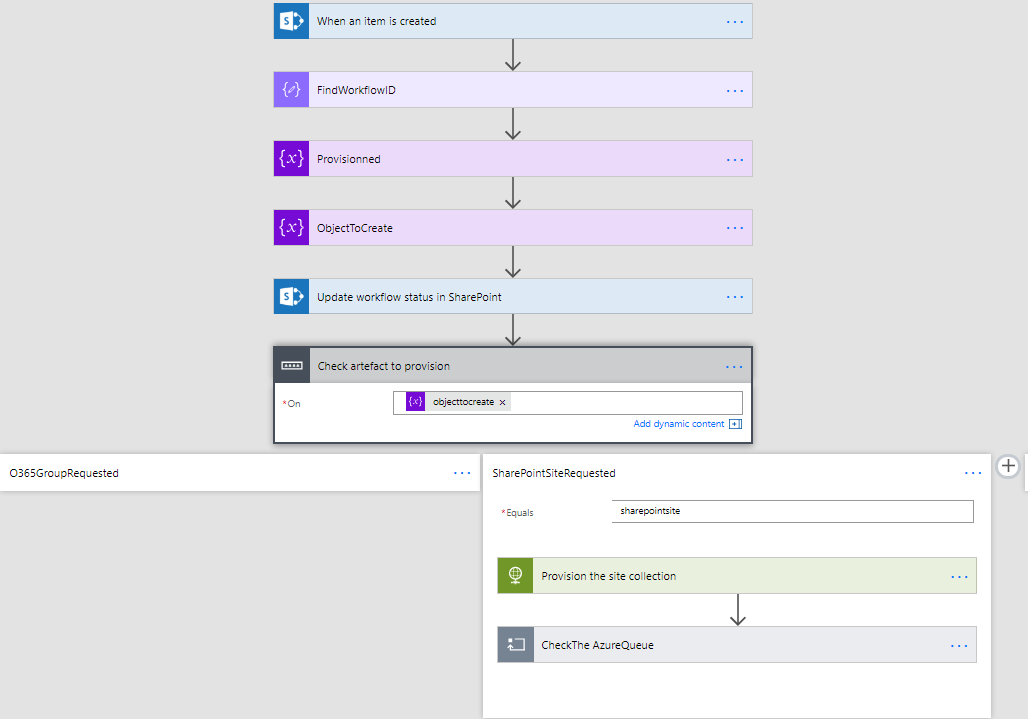 Here is the user input form :

Then a (work)flow is automatically triggered (action when an item is created) and will proceed to the site creation.

The flow will just notified the user (it will update the SharePoint list item status) that the site is being provisioned. This is the goal of the first action Update Workflow status in SharePoint.

And when everything is completed (site provisioned and template applied), the flow updates the request status again ("Update workflow status in SharePoint")

However provisioning the site/ site collection cannot be done directly in Flow. That's why I had to rely to an external REST Service (a "custom connector" as we call it in Flow), more  specifically to an Azure function to make it simple.

Here is what I did in a first place : 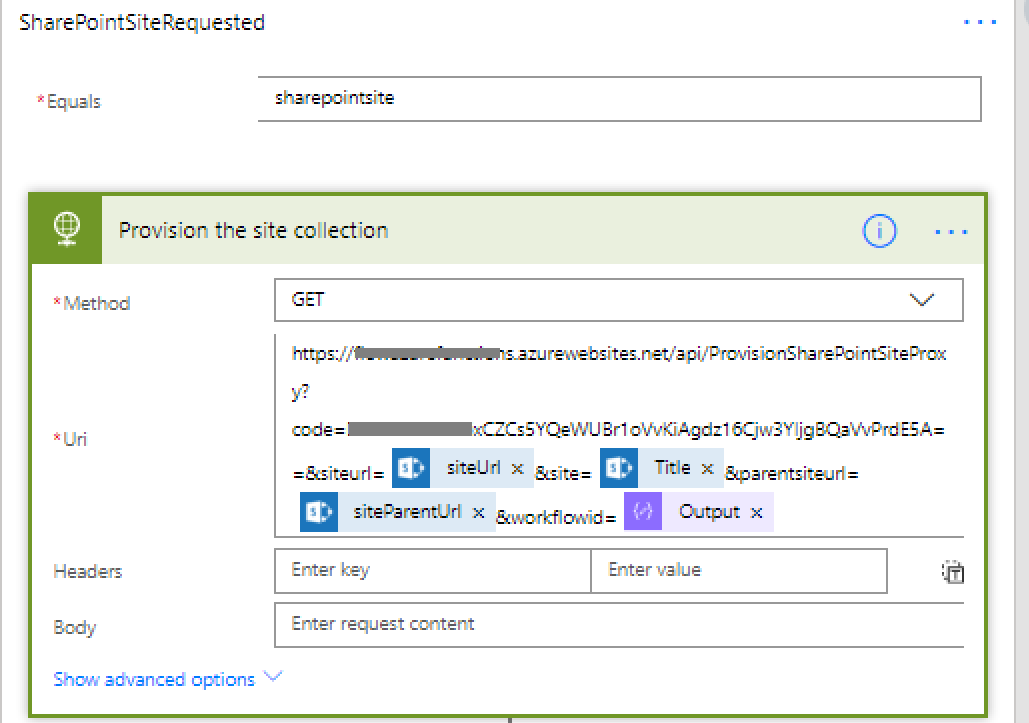 Also creating the Azure function in Powershell and importing the PnP dll in order to use the PnP Powershell cmdlets was very easy (you have to go to the Platform features menu in Azure, Advanced Tool- Kudu and add the PnP dll to the correct location).

But the problem was that creating the site  and Applying the template sometimes took a while : more than 7 minutes; and my Flow moved to a failed state because of a timeout in the flow execution.

So instead of working synchronously with Flow, I had to work asynchronously (as my teachers in computer science told me 35 years ago in the University 🙂  but I know I know... I digress ...).

So I created a first Azure function (ProvisionSharePointSiteProxy, written in C#) taking my parameters from Flow and storing these parameters on an Azure Queue. This function is invoked synchronously from Flow and is a kind of fire and forget.

Basically the Azure function retrieves the Get parameters sent by the Flow:

You have to reference  Newtonsoft.Json if you want to serialize your parameters into an object (JsonConvert.Serialize(...)) and put it in the queue.

I will explain later the goal of the variable workflowid.

In order to have a queue, the Azure function needs an output queue, and this can easily be created in the "integrate menu" of the function. The output queue (in Azure storage) is called outputqueuesharepointprov and the parameter linked to the queue is called siteInfoQueueItem as described in the next picture

I've created another one (DoSPSiteProvisioning written in Powershell) , automatically triggered when a new object was created in the queue outpuqueuesharepointprov.

Here is the integrate property of this function:

As you an see the outputqueue of ProvisionSharePointSiteProxy function  is used to trigger the DoSPSiteProvisioning that does the real job.

When it is triggered, DoSPSiteProvisioning will:

Here is the Powershell code of my Azure function :

Of course your azure function has to behave as an App (App Permission) so you need to define an App id and App secret (I did it in SharePoint, you have to do it in AzureAD if you want to create Office 365 groups); you have to define the values in the Azure function  (I've created variables in the Application settings) and your Connect-PnPOnline cmdlet should use them.

Also as you can see I store a status information ($operationStatus) in an Azure queue ($outputqueueitem) defined as an output object in the function :

Indeed when the message bubbles-up in the queue the flow will catch it,  but the Flow still needs to make sure he owns the object : indeed several Flows can run in parallel because several users can make a site request, so this must be handled. And that is the reason why anytime I call an Azure function I pass the FlowID along (this is a good practice in the world of workflows, for instance in the .Net Workflow Foundation we had to deal with the correlation id).

To get the workflowID, just intitialize a Flow variable and use the expression Workflow() :

Now how did I called the Azure function from Flow ? I've used the out of the box HTTP action with the Get  method   ("output" is the content of my variable FindWorkflowID as discussed above)

My Flow was not just a fire and forget : my users want to be notified when the site is provisioned and when the template has been applied. That is the reason why my Flow check the status of the queue outputqueueitem. (I know this is a very bad name).

So I've used an Azure Queue - Get Messages action to check the status of my azure queue and I check the queue every 10 seconds in a loop until I get a message containing my workflowId.

Here is a high level overview of this loop :

The condition code is interesting : basically the logic here is: if I find the workflow ID information in a queue message, that means the operation is completed.

I had to rely on the Logic Apps Worflow Definition Language to do it :

So the whole site provisioning part of the flow looks like this:

This was very easy : here again you cannot directly provision an Office 365 group from Microsoft Flow, so I decided to implement an Azure function written in Powershell and using the New-PnPUnifiedGroup cmdlet. That internally uses the Microsoft Graph in order to create groups. And to connect to the graph you need to use the PnP Cmdlet Connect-PnPMicrosoftGraph.

To use these cmdlet, you need to to connect to the Microsoft Graph using Application Permissions. Read the following tutorial.

Once your application id and secret id have been defined, you can use them in your Azure function code; here is fragment of my code: 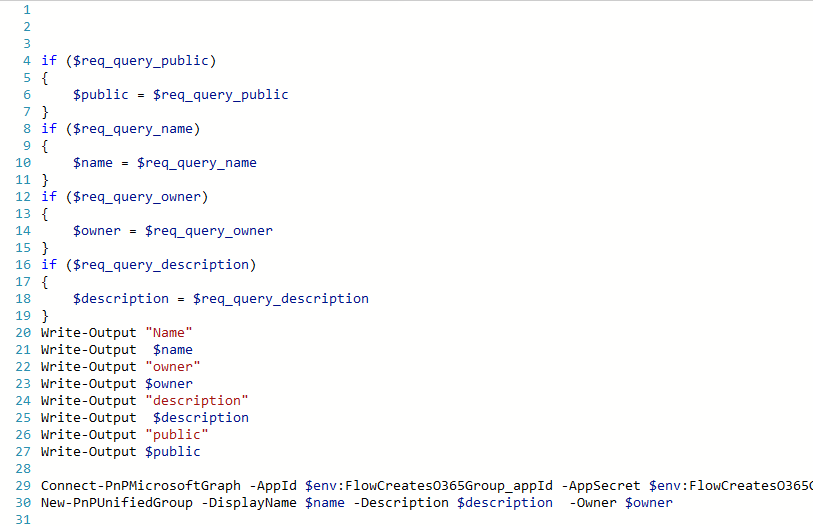 Provisioning an Office 365 group is quite fast, you don't need to work asynchronously as I did before with the SharePoint site provisioning.

I also just discovered that there is an Azure Flow action for creating Office 365 groups without having to write code.

So happy coding & flowing; let me know what you think of this

I just start using Flow. And i want to create a Flow where if a specific website get an update it sends me a push notification. Please help

Really cool stuff, thanks for sharing.

-Why you used queues and not service bus? Just wondering, I am trying to understand the pros and cons of the alternatives.

-Do you think it would have been the same to "HTTP POST" from Flow directly to your powershell -the DoSPSiteProvisioning- and  then asking the flow to check on the queue with out checking for HTTP RESPONSE?