Adding text or image of text to PDF

I'm trying to add an ID number to a PDF, before archiving it. It's a six digit number, which should be added at a specific position of the PDF on a specific page (i have several different formats, where I'd like to specify the location based on filename).

Has anyone had any success with something similar? Preferably without 3rd party software, but scripts would be an option.

It could also be adding a picture of the text, if that makes it easier. I'm also willing to use Power Automate/ Flow, if that could simplify the process. But PAD would be preferable.

I think i have found a viable solution!

Using the free Adobe Reader, I'm able to add comments, which is enough for this use case, and keeps the signing history for the document.

Thanks for the inputs though! 🙂

Maybe this is not the answer what you want, but what about using Word app to open PDF file?

In below example, I use Word app to open PDF file, type 012345 into the top of the document, and then export it to PDF format file again. 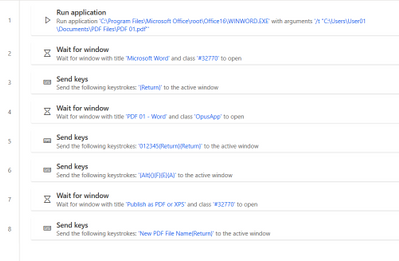 Resolver II
In response to Anonymous

I just tested it, and its close to a working suggestion, although some elements from the PDF act a bit funky when opened in Word. Some letters are jumping around, unfortunately.

If it wasn't for that, I would gladly use your solution! But, since the documents are legal contracts, i can't allow any other modifications besides the addition of the ID, before archiving.

Assuming you have Adobe Pro, I would look into Header and Footer options.  They are very customizable and it's how I did the Bates numbering for a recent divorce/custody case with over 600 pages.  I even see an option for "Apply to Multiple Files" 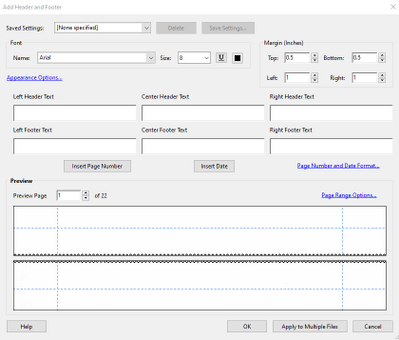 Regardless of whether or not you can find a solution here in Adobe Pro, I also recommend Adobe Split Pro.  It is a 3rd party software that runs about $100-120 per computer license (that's for life, no membership).  I use it to split, merge, rename files, etc.  It probably has a function or two that would be useful for Bates numbering.

Resolver II
In response to MichaelAnnis

Thanks for chiming in - always appreciate reading your suggestions here on the forum.

I've also considered buying Adobe Pro, but I would need an option to place the text at a specific place on each template. Not in the header or footer, but in an "ID field" (formatted as "xxxx ID: ___________") in the text on the last page. Do you know if this is possible with Adobe Pro?

I think i have found a viable solution!

Using the free Adobe Reader, I'm able to add comments, which is enough for this use case, and keeps the signing history for the document.

Thanks for the inputs though! 🙂

Grats.  With Adobe Pro, you can add text anywhere, but automating it would be harder.

Resolver II
In response to MichaelAnnis

Yeah, it looks like adding text programmatically to PDFs is kinda tricky. Unless you go all in and use some Python Libraries or something similar.

But for now, with just a handful templates, i believe im fine with just hardcoding where to place the text through mouse clicks on screen coordinates and keyboard shortcuts.