I am having trouble with an command, that I use in another RPA tool with CMD.

The command has two percentage signs %%, and when I use this in Power Automate, it thinks that is has to look for a variable.

I have tried to use string(' ') without any luck.

Not sure how to fix this. Any help would be greatly appreciated :). 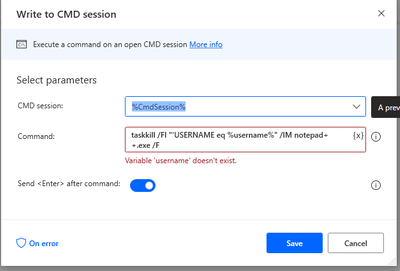 Write %%username%% in your command.

Write %%username%% in your command.

@Henrik_M Nailed it. A single percentage sign is used as a variable identifier. The first one starts it and the second one ends it. That’s the easy one, but there are other characters that have to be escaped depending on the action you are using. If you ever feel like PAD is changing your text, then there is an ESCAPE TEXT action that will take care of this, so, if I have %Textvariable% that I know has a % sign in it, and I want to escape it:

Thanks for the tips.

EDIT: My bad. %% did work. I accidentally had an ekstra ' inserted.

But Regarding the Escape test, then unfortunately it does not seem to work with %username%, it still thinks that username is a variable. 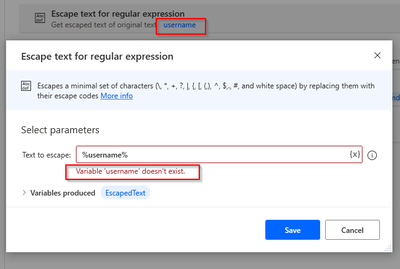