I need to send Alt+F2 to an application. I am successfully focusing the window then I tried using the "Send Keys" node to send the command. I found this solution on the forum so have tried the following:

None of which worked.

I have tried with a large delay on the "Send Keys" node and a 0 delay, and also sending as hardware keys.

I recorded my action and the macro recorder showed the combination as {LMenu}(){F2} which also didn't work. 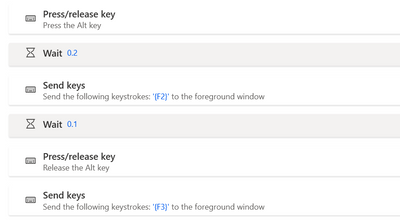 Each combination I have tried only seems to be sending the F2 command.

Other things I have tried:

Unfortunately I'm also unable to rebind the key combination, so I've hit a bit of a road block.

You seem to be on the right track.  A shame it's not working.

By default, "Send Text as hardware keys" should be off.  I have never had to turn it on.  But for the sake of troubleshooting have you tried both on and off?

Thanks for the quick reply.

Yes I have tried with "Send Text as hardware keys" on and off.

The odd thing is, I have just tried it in a loop and it works once in a while, maybe every 15 tries. Doing it manually works every time so I don't think it's the application

That's so weird.  Anything you can do to utilize that, such as set up the loop and before it attempts it again, say, If element exists, Exit Loop.

Yes that's what I am doing currently. I check for an image to see if the UI has loaded then exit the loop. But with the time it takes to check for the image and with success being so infrequent, the task I'm trying to automate would take several hours

@MLaverick , I had the same issue sending keys to MS Excel.
I solved the issue adding Waits before and after the Send Keys.
I tried to remove one and other and now it is working fine.
I also tried to use a shorter and a longer "Delay between keystrokes", but adding the Waits solved the issue. 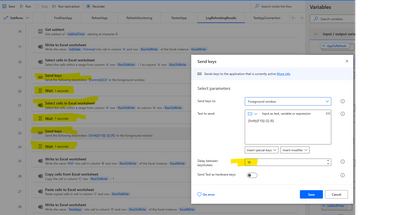 Thanks for the reply, unfortunately that didn't work either.

I have it working if I just loop the command over and over until the menu is recognised so will stick with this for now, but this makes me think that there might be a bug.

It works a lot quicker outside of the debug mode so it's mostly fine.

Helper III
In response to MLaverick

Helper III
In response to MLaverick

So I guess whether the problem is not in the key you press but the window where you are.

It's actually a shortcut to open an NVidia tool, "Ansel" for taking 360 screenshots.

Thanks for the suggestion.