Desktop flow no longer working when run as unattended

I have a desktop flow which was previously successfully running as unattended.  I then encountered an issue where all actions on the flow were replaced with 'Unknown action'.  Thanks to this forum, I found out the reason for this was "the certificate binaries are signed with expire on March 3rd".  An upgrade to v2.5 resolved this issue.

I logged the issue with support 15/03, but no progress as yet.  I have since upgraded again to v2.6.  I have tried changing the folder path from being a mapped drive to specifying the network location.  I have tried amending one or two of the other settings on this action - there's not much I can amend, but no joy.  The unattended account has the necessary access to the folder, and as mentioned it will run with that account when run as attended / previously ran as unattended

If anyone has any ideas, gratefully received.

Does it work with local folders?

Just tried changing the folder to the C drive and same result.

I'll have a try creating a new flow to test this action outside of my existing flow - albeit probably tomorrow.

Does it fail immediately if you put a fresh Get files right at the beginning?

I was originally passing the folder location as a variable into the action.  When I amended this so that the address was pasted into the action and ran again as unattended it worked!?!

I am on to my next issue now - another action failing only when running in unattended (click link on web page), that worked previously (prior to moving from PAD v2.3 to v2.5 / v2.6), and works when running attended.

We are seeing this same issue, but pasting in the network path to the Get files in folder action does not resolve the issue.  It can retrieve files from the local file system (on C: drive) but not from a network share.

Here is a manual work around while you wait on Microsoft PAD Development team to fix the network issue with unattended bots.  Hope this works: 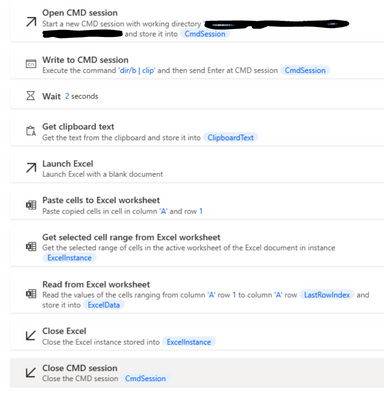 Short story, it uses command to prompt to copy all files to the clipboard (that is the dir/b | clip command), pastes that into Excel, and then reads Excel to save the "ExcelData" as a list.  I tried "Get Clipboard Text" but it was just text, and couldn't convert it to a list, so the Excel steps are necessary to get all files as a list.