Does looping won't work If i got too many steps?

I got a workflow that required me to loop through 63 steps. But it doesn't loop after runs all the 63 steps from the start. But if I were to minimize the steps to just a few, it can loop without any issues. I doing a loop function by creating a counter var. and increase the variable after each of the task. 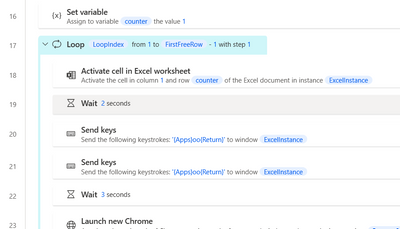 Another thing as well got issue is when I wants to click link from excel, I will instruct a command: "{Apps}oo{Return}" , but when I run this flow it won't send any response if I got too many steps in my flow.

As far as I know, there are no limitations on actions within a loop, but if you want to reduce the number of actions inside a loop, you could try to move some of them into a subflow, and run the subflow from within the loop.

Also, I don't see you actually using the "counter" variable for anything (other than incrementing it), and the LoopIndex is doing the same work as you want the counter to do by default.
You are looping through from 1 to "FirstFreeRow", but maybe FirstFreeRow:s value is lower than you expect?
That would mean that you won't loop enough times

You don't increase the counter variable.  There are 2 main loop types in PAD.  Loop and For each.  For each does every item of a list or every row of a datatable.

A loop's number of iterations is defined in the Loop parameters; example: