path is correct , as when provided directly to launch excel action it is working perfect , only error when passing through input variable. 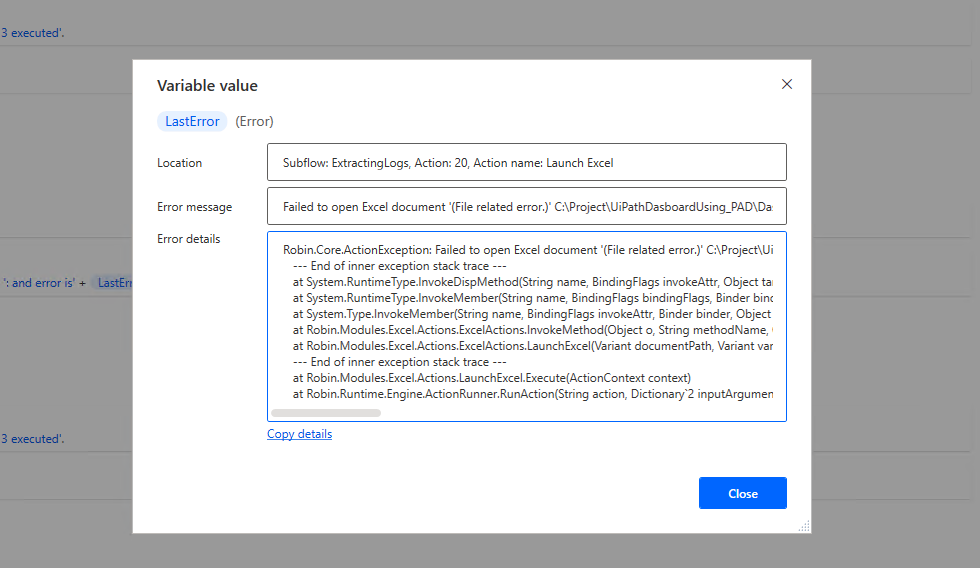 did you find the solution?

Please double check to see if the extension of path is correct or not.

Please mark it answered if you are satisfied.

I have the exact same issue.

File opens fine when i add the path directly, but file wont open when the variable with the filepath is used.

Is there any fix for this? If not, it seems like a big deal, not to be able to use variables with filepaths.

Depending on your OS config, you might need to escape the '\' . Try replacing each \ with \\.

That does not seem to be the issue.

Because it works fine when i add D:\test.xlsx  to 'Document path:' field.

I have done some further tests:
When i use the variable, that Power Automate created by using "Get files in folder", it does not work. Even though the correct filepath is shown.

My solution to this, is using a 'For Each' step to loop through the 'Files' variable that 'Get files in folder' step created.
Then adding a 'If' step to find the specific file I want  (using contains test.xlsx)

Then using 'Set variable' to set 'CurrentItem' variable (that was created by the 'If' action) to my own variable called 'filepath'.

Next using the launch excel step, to open the excel file with 'filepath' variable.

This is too much work. The 'Get files in folder' step, should be able to produce the a working variable that can be used directly in Launch excel or Run Application.

I have the same issue.

Looks like MS is not going to fix this.... maybe there is a work around..