Not sure why Microsoft wasn't able to provide this functionality yet.

How do you use it? EDIT:  If you don't know what a RSS feed was like me, google it, and then it's easy. Add RSS plug-in to your browser and link the source.

Memorable Member
In response to DanielOlsson

The RSS feed? Just put it into Outlook or your preferred reader/downloader or create a cloud flow with a RSS trigger and HTTP download

Seems like that the built-in update notification doesn't really work!

Helper II
In response to fraenK

Hello Fraenk.  I spoke to a Microsoft support engineer today and this issue with the latest update, where the client do not detect that it's out of date,  is known and they have reported it to the devs. Hopefully, a fix will be made in the next release.

Indeed it will be fixed in our next release.

Helper II
In response to fraenK

Thank you Frank for letting us know there is an update to download.  Unfortunately, they have not fixed the check for update function, which was not detecting the July update either.. ?  Manual download seems to be the only option. Do you have this issue as well ? 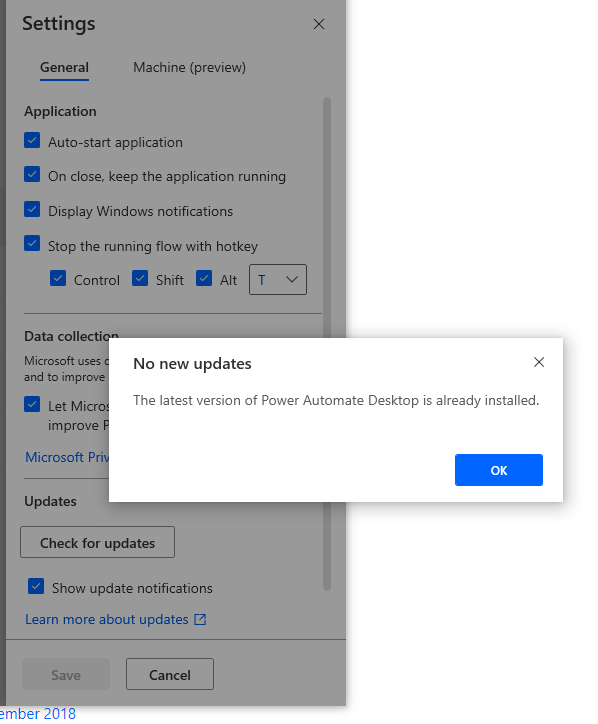 Memorable Member
In response to DanielOlsson

Just create a cloud flow with a RSS trigger and HTTP download using the feed url in the first post.

Memorable Member
In response to kostasc

Why do we have to wait for 1 week and manually download and install it until then? Thought the tool is about automation?

I think that I haven't explained clearly what I wanted to say:

There was a bug with all previous versions (that supported the update notifications), resulting on showing the update message a week after the actual release. This bug got resolved in August's release, which means that the users that install the latest version, will get an update notification in September, as soon as the release lands.

However, the users that do not update, will get the same notification, a week later.