We're in the middle of automating our user creation process with a cloud flow, PAD flow and a powershell script. Currently the cloud flow triggers the pad flow. In this pad flow I've included a powershell script that actually performs the tasks. Think about creating a user mailbox in Exchange, add groups to the newly created AD account, etc. . I managed to use the PAD flow Input Variables in the Powershell script by "converting" them to a powershell variable, like this:

This all works perfectly fine; I'm able to use the information from the cloud flow, that's put in to the PAD flow input variable, as a variable in the powershell script (first name, last name, for example).

However, there's one big challenge I face and I can't seem to get around which is getting some output from that powershell script back into the PAD flow in a Output Variable. Why? Because the cloud flow requires an output variable from the PAD flow in order to continue / finish. I tried to do this by using the same method "in reverse", like this:

Unfortunately, that only results in an error and doesn't work.

Does anyone of you know how I can get certain data from my powershell script back into that PAD flow and use it as output variable?

Many thanks in advance!

I'm sorry if my intent is different from your question. 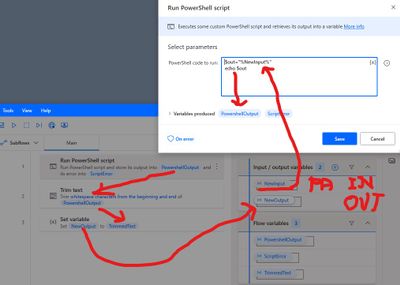 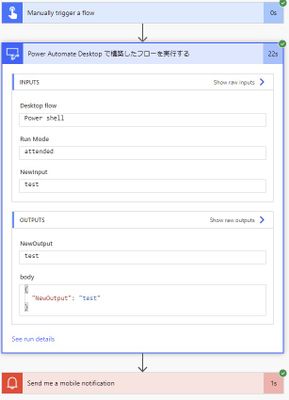 Have you got the solution for the issue mentioned? Like creating a PAD variable in PowerShell script is possible or not? If possible, how to do that. If not what is the alternative steps you performing. Of course, we can get output from the powershell output variable. After that, with text operations we can split the value. That doesn't look better choice.

Powershelloutput and ScriptError are predefined output variables by Power Automate for this action.

Would you please elaborate what input are you looking at and what split variables are you expecting out of it. 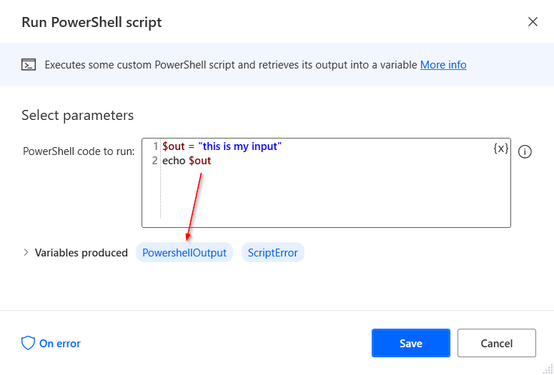 Anonymous
Not applicable
In response to LukePWilkins

I see what you mean. Since the powershell engine will only run a script written in powershell, No we cannot create PAD variables inside power shell script.