Can any one tell me ,

1) how e can add Datatable activity in Power automate desktop, ?

2) How we can store in dadatble variable, so that finally we write that variable into ExcelFile?

3) How to convert variable to Datatable?

I have to store value in Excel file,Any suggestions/Hint will work.

Information on creating your own DataTable is located under "Datatable" under Advanced Data Types in this link:

I, however, have not discovered a way to insert a variable into a custom datatable....so if anyone knows how to do that, I'm all ears. I've had to use Excel as a workaround, like you had mentioned.

Information on creating your own DataTable is located under "Datatable" under Advanced Data Types in this link:

I, however, have not discovered a way to insert a variable into a custom datatable....so if anyone knows how to do that, I'm all ears. I've had to use Excel as a workaround, like you had mentioned.

Helper II
In response to ryule

Thanks, This helped a lot.

Thank you so much. 🙂

Use %vData + [rowd, rowdd]% where rowd , rowdd are variables and vData is datatable.

The key to using variables to set items in a datatable (which makes little sense) is to remove the % signs from both ends of the variable.  Where you may think that %MyTable + [%variable1%, %variable2%]% would be correct, it's actually %MyTable + [variable1, variable2]% .  This is a strange quirk of the engine because if you enclose the variables in % signs (like you would do anywhere else) PAD will try to "pair" the % at the start of the first variable with the % at the start of the statement, essentially making a variable called, "%MyTable +[%". The information following that incorrect variable is then interpreted as garbage so it throws an error.

Yes I have since discovered that; thanks! And I just saw they introduced some new DataTable actions, but haven't checked them out yet!

Hi all, I have checked it out and I did not manage to add data to a data table row. Which format is needed to do that? My tries with a defined table of 4 colums were: 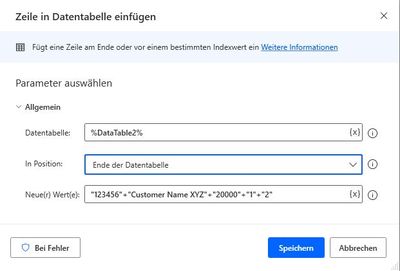 Any info how to solve that?

I 100% agree with you that you should be able to insert new data directly into the table. I haven't figured out how to do it using these new Actions.

I did discover you can insert a row into the datatable with a list, as long as the list has the same amount of rows as the datatable has columns.

So for instance, below, I created a list with 3 rows of values, and then created a datatable with 3 columns, then inserted the list as a row, and it worked.... 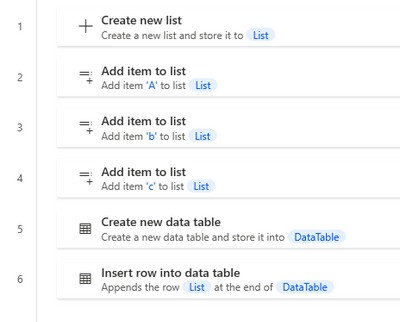 You came pretty close with your last try. It should look like this:

So the format for a datarow is a comma separated list contained by square brackets inside of percentage signs.

Note how ColumnNVariable are variable names containing the values DataN, while 'Data3' and 'Data4' are hardcoded values contained in single quotes.

This is what the datatable looks like after the insert step has run:

*I created the datatable with the InitN values already there before the insert happened.

See my response to hoernchen above on how to insert a row to a data table without making a list first.

what @JCiriello98 mentioned, that works. However, it doesn't make sense to have first row (row 0) must be available. I'm appending dynamic rows and this row 0 was required to delete at later step.

However, I'm seeing that the column name are not actually created what I mentioned as list. If we see, I used '_' (underscore) for the columns names : 'Queue_Name', 'Row_Id', 'Queue_Id' while defining column names (^ caret sign) in Set variable. But if we see this in Variable value after running this action, the column name values are updated without underscore. [Underscore is still available with the first column name : 'DTStatus_ToUpdte'.]

Please note that I made the correction (from without underscore to with underscore) in column names later for better readability. It looks like something memory issue. This happens even after rebooting machine as well.

Great, thx for the solution (at least for my question 😊 )