Do we have the ability to connect to the Windows Credential Manager(storage of login and password) in power automate desktop?

Not out of the box, only with CyberArk. As an alternative, you could use PowerShell, for example: https://childebrandt42.wordpress.com/2020/07/07/using-windows-credential-manager-with-powershell/

@Mican, as an alternative you might have a look at this thread for using Python 3 to work with Windows Credentials.

OK. But the credentials are logged in the cloud as plain text

@fraenK It's supposed to be an unattended flow. If it uses the input variable "sensitive text" then it will output the following message when starting the flow. Is it possible to disable the message?

Memorable Member
In response to Mican

Helper V
In response to Mican 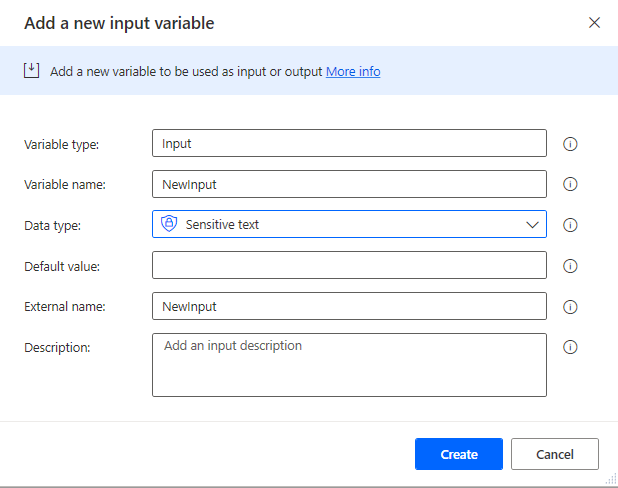 your flow will run fine from the editor and (presumably) load the variable with whatever you set for a default value (no popup). But when you run it from the Flows panel, you get a popup.

Seems likely that creating an 'Input' variable from the Variables panel (which has no dialog options other than content, nothing other than variable name to let the user know what's desired) means that a default dialog will be created, i.e. the message, just because it's an 'input' variable.

The types we can create from the Variables panel are limited to 'input' and 'output', so we're stuck, I guess.

But there ought to be a way to create a Flow variable as 'sensitive text' (ergo with no offending popup).

I think creation of an input variable should get some added attributes/parameters (like those of the Flow action for input dialogs). Plus we should have the ability to create a 'sensitive text' variable from the Actions that won't pop up a dialog at all, regardless of how the flow is run.

You can use Powershell (usually built in on Windows, unlike Python) to get credentials. The "Target" parm is the name of your credential as listed in Win Cred Mgr.  A powershell variable can be read into a PAD variable. Example where I get a password in a flow: 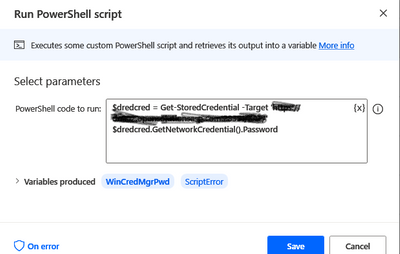 You will have to load the CredentialManager module for Powershell: