Skip to main content
Go To
Turn on suggestions
Auto-suggest helps you quickly narrow down your search results by suggesting possible matches as you type.
Showing results for
Search instead for
Did you mean:
Idea Options
17 Kudos
Vote

Clear and Turn off Notification for Failed Flows

I've been testing several new workflows and fully expect them to fail.  However, I continue to get the auto-notice when they've failed, and can't find a way to clear them from my browser.  These are clutter and get in the way of real notifications.  I'd like to turn these notiofocations off, and clear the 'test' failures from my history.  Thanks! 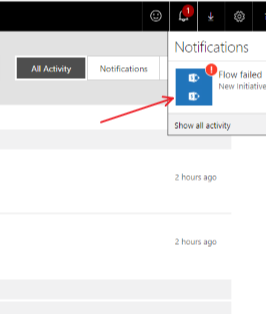 Hi Maria - this question is in regard to Office 365 notifications issues from Flow.  It doesn't have anything to do with phone settings.  I think you've posted in the wrong forum.

My current understanding is there is no way to adjust this bahaviour.  I'll just have to live with annoying delayed notices from "failed" workflows I'm testing, and hope I don't miss any important notices from active jobs.

Currently there is no way to acknowledge a flow failure. for instance during my initial setup there were several runs made during development that I am no longer concerned about. Getting notices EVERY DAY for failures I've already seen is not just annoying it's rude!

I would suggest adding an acknowledged failure checkbox so that you don't keep receiving false positive failure emails.

Getting emails for all of eternity on information I already know is as we would say here in the south, "Useless as **bleep** on a boar hog"

Thanks, Please fix this annoying and rude behavior.