Skip to main content
Go To
Turn on suggestions
Auto-suggest helps you quickly narrow down your search results by suggesting possible matches as you type.
Showing results for
Search instead for
Did you mean:
Idea Options
367 Kudos
Vote

When sending an approval email through Flow, if no answer is received within 30 days, the Flow times out and fails.

In some cases, 30 days is not enough time to receive an approval.

@Stephen We have an immediate need for this feature as several approvals are reaching the 30-day mark. Is there a plan to implement this feature? How soon?

If there are multiple Approval stages in a Flow, the recommended solution will not work.

1. I have a Flow which has two stages of approval. The second stage will only initiate if the first Approval Response is Approve.

2. Furthermore, the recommended solution seems to monitor for and respond to any and all Approval responses, and filtering to look at input from a specific Approval and Flow so it doesn't fire off every single Approval in our environment will prove to be very difficult.

With regard to the first issue I state above, using the recommended solution, the second approval will never commence if the first approval takes longer than 30 days to complete.

I am forced to use a work-around which will notify the end-user 14 days and 3 days before the approvals will timeout. However, even with the workaround, things will get rather messy once the second approval has started after 25 days (for example) and only has a few days for the second approval to complete, and the second approver happens to be out of town or any number of scenarios that could happen. 30 days just is not enough. However I was able to spin this positively with my client because I made an argument that these approvals should not be running for long periods of time anyhow and that people should be made accountable to perform their due diligence in a timely fashion. Luckily they feel the same way although it still feels like I'm playing it very close to the chest. We plan to deploy this new work-around sometime this week.

What we really need is the ability to run Approvals for longer than 30 days (as the post explicitly states). I recently found out that Logic Apps can run for 90 days, but Approvals don't work with Logic Apps. All programmatic workarounds do not seem to support a 2-stage approval like mine, and unfortunately this is a very simple and common business case in my industry, and is seemingly unsupported by Flow. A 90-day approval period would suffice, but the option for 180-day approvals would be perfect.

Here are some details about the solution I have made which could greatly benefit from a longer Approval period. I am open to suggestions since the solution currently feels very convoluted and is quite difficult to maintain. Keep in mind that the average end-user for this solution is nearly computer illiterate so user experience plays a big part. Must be as simplistic as possible for them even if it is difficult for me. 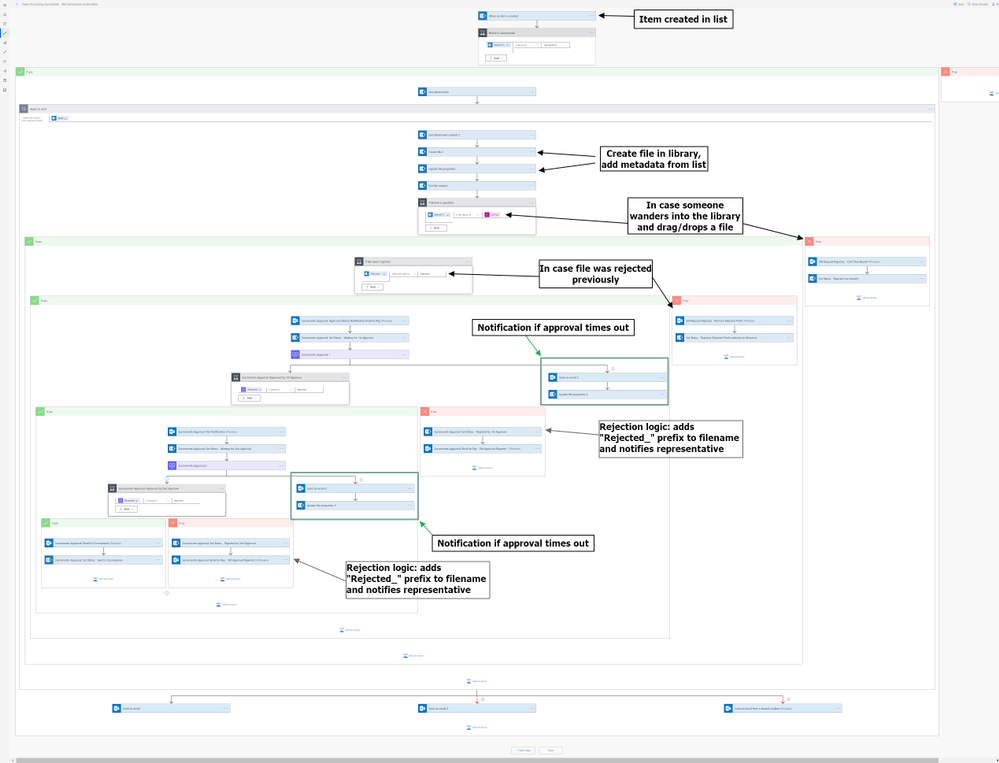 1. Salesperson uses a custom InfoPath form to attach a document and set metadata such as Branch and Representative.

2. Flow runs when an item is created in the list. (FYI - Each branch has their own Flow since the Approvers are different between branches). Flow grabs the attachment, creates the file in a different library and adds the Branch/Rep metadata to the file properties. Library has an additional field for Approval Status.

4. Approval starts, goes to the Branch Manager. Link to the file is included.

6. If second approver approves, an automated email is sent to our Commissions department and includes the file as an attachment.

Hi @RHCC  - the approach recommended in the blog post is-- each time where you would use a "Start and Wait for approval" to instead use a "Create an approval" action. Then, have a second (or third, or whatever you want) flow trigger when the approval proceeds. You can pass the context into the details of the approval and then use that to run your queries against SharePoint etc... Breaking this process into multple flows will also be much more maintainable (the above screenshot shows that the flow may be abit difficult to work with at its size). Let me know if this helps, adding @Karan_MSFT  as an FYI.

The amount of Flows required for this workaround is going to be excessive. The problem I see is that the example I presented above is 1of 11 total branches that use the same Flow structure for the same objective. So by splitting the Flow into, for example 2 Flows per branch for better maintainability, and then using your workaround which seems to add at least one additional Flow per branch, things will get much more difficult to maintain. Is this accurate? Do you see a way to keep the # of Flows minimal? Thank you.

This has been marked as COMPLETE - but this is not a solution.  This is a work around that requires creating whole new flow processes and use of the Common Data Service (which I'm not using).

This is not what I want!!  I want our exisiting Flows with Start and wait for an approval (V2) to not expire after 30 days.

It's hard to say without looking at the Flow directly, but yes, you should still be able to simplify it -- you don't need to have each branch have a separate flow, you could have one flow to simply receive the events of an approval being completed and then add a condition or switch case to dispatch to the next stage of the approval -- all inside of one flow.

Not happy either.  The COMPLETED/possible solution includes a trigger that is PREMIUM.  The previous workaround "When a HTTP request is received" is now ALSO PREMIUM.

just thinking about the workaround.   how about create a second approval only run if the first approval time-out and you can assign the second approval to the same user as the first approval,  which means now it's 60 days for the same approval.  probably not very good solution if you need 6 months time-out,  but i think its still easier & cheaper than the CDS solution.     anyway,  i am going to try this out and hope it will work..

I agree 30 days for the flow to timeout is awful.  I had to write rerun flows to send out again .

This is awful.  I think it needs to be more like 6 months before a flow timesout.  Alot of approval flows take time to process due to research.

Microsoft!  Listen to the suggestions