Skip to main content
Go To
Turn on suggestions
Auto-suggest helps you quickly narrow down your search results by suggesting possible matches as you type.
Showing results for
Search instead for
Did you mean:
Idea Options
1 Kudo
Vote

MS Flow - D365 Fin ops 'Update a record' is broken due to mandatory fields that are read only in standard entities.

The update record feature in the Dynamics 365 FO connector does not work for several entities  in D365FO.

The MS Default Entity 'Project' cannot be updated through MS flow due to the way it wants to update the record. The field  ProjectType is Mandatory but is read only - resulting in a error when MS Flow tries to write to the field. 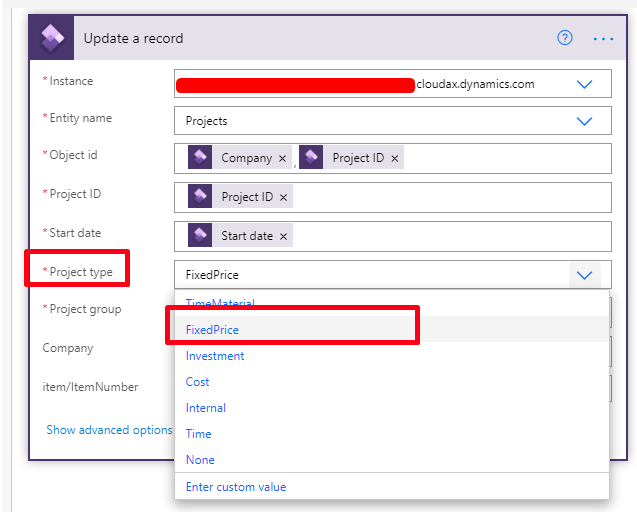 This also happens with other fields that are in other entities including custom entities with the same issue of being mandatory for creating a record and is read only after creation.

The required fields are not required for the lookup of the record I want to update, but I assume it shows them as mandatory since they are mandatory in F&O at record creation and that's what D365FO/server side says.

My request is that the 'Update record' action is fixed so that it does not require all the mandatory fields from record creation. As of now the update record feature is broken in certain entities as mentioned, or barely useable in other entities.

Do you already have a solution for your problem? I have a simular one with another entity.