Skip to main content
Go To
Turn on suggestions
Auto-suggest helps you quickly narrow down your search results by suggesting possible matches as you type.
Showing results for
Search instead for
Did you mean:
Idea Options
108 Kudos
Vote

I would like to be able to copy or print my Flow steps and actions to a text file. This woudl be very useful to document what I have done and allow me to be able to reproduce, record and analyse Flows that I have created.

100% agree with this. Recently a collegue made some changes to a form and I needed to get back to the correct configuration. It would have been so helpful to have had a tanscript of the variables and collections to work out what had been broken. Also for future-proofing and documenting apps, this would be greatly beneficial. Thank you.

+1 from me, would be really useful for documentation

this is most needed for complicated flows

I really need this, I am currenty trying to do this using visio

Thanks for considering this.

I agree that this would be very helpful.  Good suggestion by @Anonymous  (Rob)

Currently, I do the following and store it all in OneNote:

- written outline of what the flow is doing

- copy-and-paste on variable names and their value/expression

+1  usfull to present to Managment rather than manualy recreating in viseo or word smat shapes etc..

For those attempting to get a screenshot of the flow as it appears in the designer, somebody pointed me to a Chrome (or Edge) extension called GoFullPage.  It does a great job of capturing exactly what you see on the screen, though you need to open up all the flow's actions that you want visible in your printout.

Obviously, this does nothing for exporting the flow contents as a text file.

As a workaround (or perhaps as an overkill at text "documentation"),  one can export the flow and then get the flow's JSON definition.  Not the prettiest thing to look at, but it is HIGHLY detailed (as it is the actual flow in its "native" text form).  Here are some screenshots using a flow exported as a ZIP package named TEMPOFBETAMASTERFLOW_20211101092616.zip which was extracted to folder TEMPOFBETAMASTERFLOW_20211101092616:

Path to the definition.json file....

Partial example of the contents of the definition.JSON file: 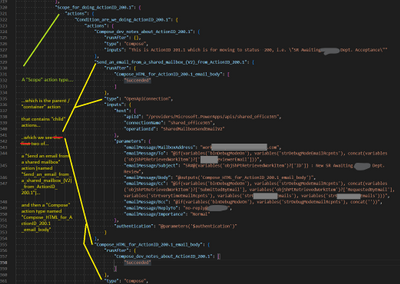