I have a bit of a strange issue here when sharing Data Connections in PowerAutomate. I can share SQL Connections absolutely fine with people in my organisation (example below) however if I try to share any other types of Data Connections that I create in the same environment not only can I not search or find employees. If I try to force it and add the email manually it displays this error 'The permission with id '/providers/Microsoft.PowerApps/apis//connections//permissions/' in the put collection requires either the id or the email for the principal.' 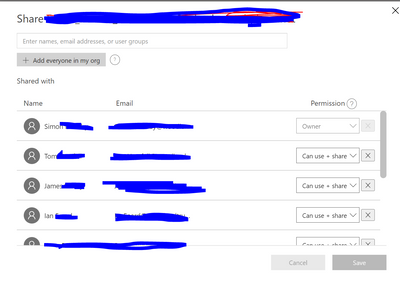 Other connections do not work when attempting to share...

When I attempt to add the email manually... 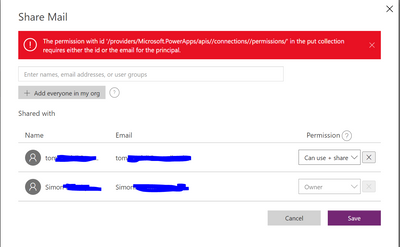 Did you find a solution for it?

I'm having exactly the same issue.

Unfortunately not @tarcisiosp - as an interim solution I have created all the data connections under our service account so we have to login to that single account to create connections, flows, releases etc. Hopefully we can find a better solution soon!

Hey all, any news about this issue? Having the same here 😣 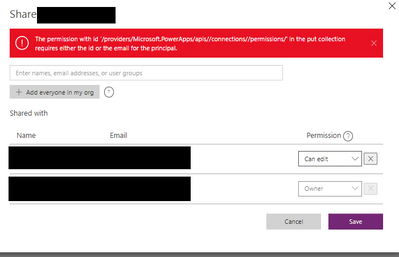 After opening a ticket with Microsoft we figured out that this connector is a non-shareable connector so a new connection needs to be created by each user, so the user needs to have permission to create connection in the Data Gateway. This is the only way we could make it work. Our goal was to use a service account but it’s not possible.

Working with Microsoft and the engineer acknowledged an apparent issue with the People Picker field and that it doesn't appear to resolve any users in the directory.

That lack of directory lookup, plus the "...put collection requires either the id or the email for the principal.'" context of the error message might suggest that it's unable to share due to that lack of resolution.

As a workaround, we were able to deploy the app and work with the users who were initially prompted to establish a connection, and then we updated those connections to change the account from their personal credentials to the credentials needed for the connection.  Obviously not a good solution, but the investigation into the underlying cause for the share issue is still ongoing.

Thank you so much @simon_c ! If you could, please keep us updated, really appreciate! Kudos for you 👏