I'm trying to send a PowerApps collection via email in an encrypted fashion.

So, my idea was to pass the collection as a JSON to a Flow putting the received JSON into a Compose action and then using the Azure connector called "Encrypt data with key", in order to encrypt the JSON (in the Compose action) using a key I have created in an Azure Vault.

Problem is that the "Raw data" parameter of this connector will accept only simple text and not JSON.

"Operation failed because some of the inputs are not valid."

So, is there a way to "Flatten" a JSON to become simple text? 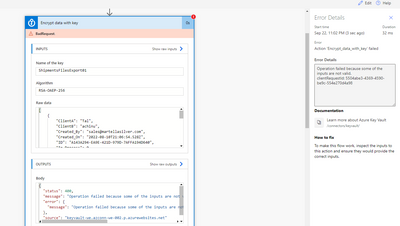 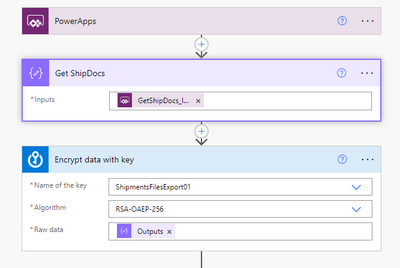 You can use parse JSON to do this.

Pass get ships doc output in it.

Then copy the output you are getting the get ships doc and add it to the generate from sample.

After this use select function.

If you want each value individually, you can just directly use the fields you are getting from parse JSON.

Sorry but this doesn't work. 😔

I still get the same annoying error message.