I have a flow which observes a Sharepoint list for changes. It checks for new items to be added and looks at two text fields in the new item. One item is moved along as plain text, but the other is the name of another list on the Sharepoint site. Here is an image of that process. 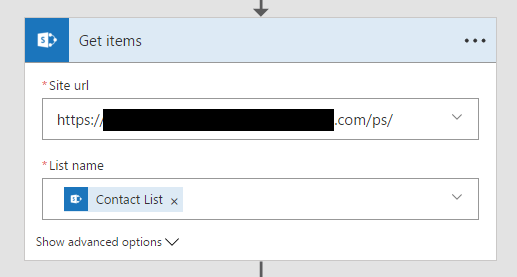 My problem is on the next step. Since I am adding the list name through a dynamic content, it does not actually give me access to anything within that contact list (of course because it does not know what will be there yet). But, since I do know what fields would be present in that list, shouldn't there be a way that I can add it manually? Just to be clear, the fields name is Business%20Phone. Something like "GetItems.ContactList.Business%20Phone"? I can't seem to get it working. 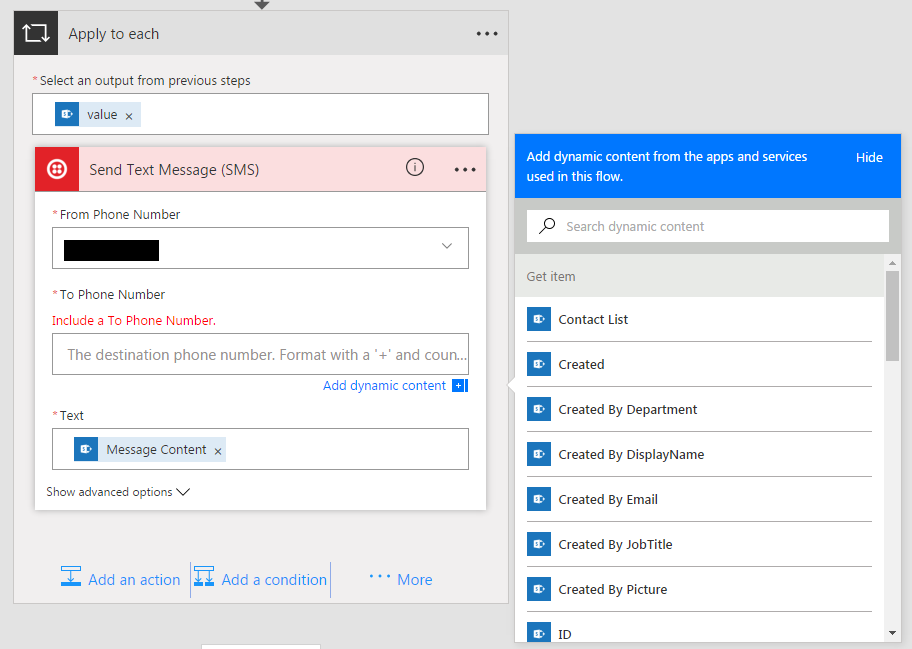 Thanks for any help. I hope I explained it well enough

I actually just figured out that you can trick it.

Where the "Contact List" variable is, enter in a known list name that you want to use. Once that list has its contents added to dynamic content, place it into the position in the flow you wish it to go (in my case in the 'To Phone Number' field).

I actually just figured out that you can trick it.

Where the "Contact List" variable is, enter in a known list name that you want to use. Once that list has its contents added to dynamic content, place it into the position in the flow you wish it to go (in my case in the 'To Phone Number' field).

In general this pattern doesnt work in Flow today.

There are coupele of issues (I think).

First, the dropdown for List name in SharePoint's "Get items" may not actually be sending the name -- but rather an "ID" of the List that you select from the dropdown.  The designer UI shows the List name, but what it does behind the scene is that it calls "Get Tables" and shows you the list.  It uses the "Display Name" to show in the dropdown but uses the "Name" field.  And they are probably not the same -- need to check.

Second, as you correctly identified, the designer cannot get you the schema/columns for the List since it doesnt know which List you are going to use.

Finally, we have an issue in the designer today, which prevents using array outputs (from SharePoint Get Items) with any action that outputs an object that contains an array (like Twilio Send Message).

Unfortunately, I dont know of any workaround.  But, this is something that we should probably address.

Logic Apps is probably an alternative, but you will have to go into advanced editor there as well.