Skip to main content
Go To
Turn on suggestions
Auto-suggest helps you quickly narrow down your search results by suggesting possible matches as you type.
Showing results for
Search instead for
Did you mean:
Article Options
PowerAddict

I finally got to making my 1st game in Power Apps, and what better than choosing my favorite sport - tennis! With all the games these days focusing so much on graphics, I wanted to pay tribute to the video games we played during our childhood (man I sound old!). Hence, the idea of a retro style tennis video game!

All of this started at 10 on one random night. The basic idea was simple: have a ball machine on one side of the court throwing balls at the player in random directions and the player has to hit as many as possible! Somehow managing to not get distracted with things like home screen, background image (of course of Roger Federer!), tennis court image and other similar aspects of the game, I laid out the challenges that were ahead of me:

I knew that once I figured out how to get past these challenges the rest of the tweaks would be easy. Here's the design approach I took to tackle each of the points mentioned above:

With these challenges now a thing of the past, it was all fun to make minor tweaks to the app to get the exact behavior. A few additional features that were added are:

So that's how the entire app was made by 2 am, all in 4 hours! Here is a collage of all the screens within the app (they are all on the same screen behind the scenes!): 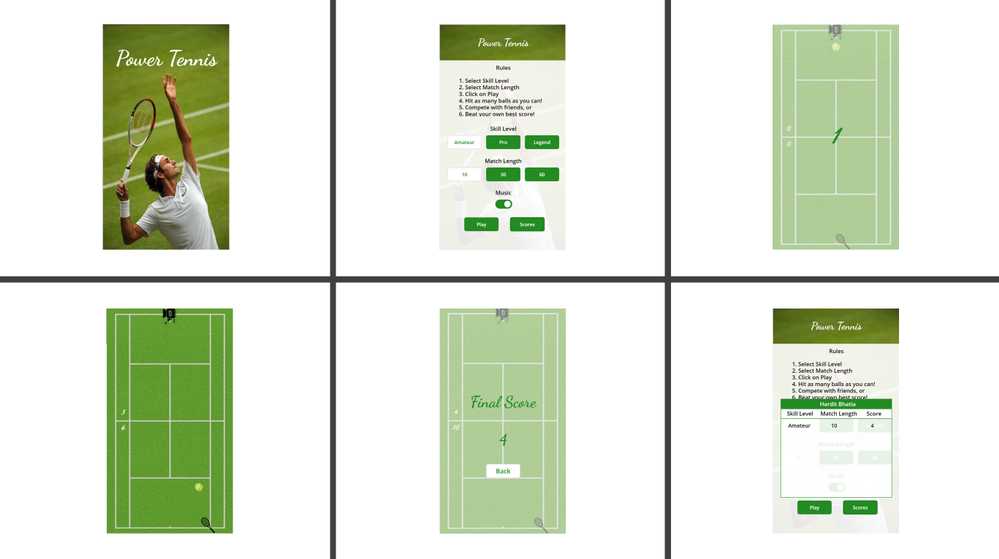 Here is a small demo of the app (some of the screens in the video are not the latest and there is no music):

Have fun! Get addicted!