I am trying to fetch a data from API in Do Until step. The idea is to run the loop n times, n can reach up to high numbers like 3000, each time the HTTP API query would fetch an output which I would like to save in a new variable, then increment n by 1. I was thinking about initializing a variable before the Do Until with blank value and make the name of the variable depend on n but apparently I cannot use expressions in the name field:

The outputs are in json. While I am stuck at this part already, my next goal would be to merge them all together into one json as they have the same schema. I believe union() expression can help me achieve that but then another issue might occur - how to list all outputs in the union() expression if their number might vary. 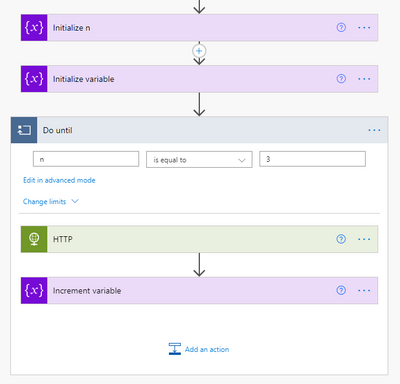 If it is possible to avoid any additional loops that would be great.

Appreciate if I could get some ideas from you all.

You can look into appending each response into an array variable.

The Do Until action allows you to set the iterations without incrementing a counter manually.