I need to populate a gallery with a collection of file properties filtered by a sharepoint document list using Flow.

I designed this sequence of flow steps: 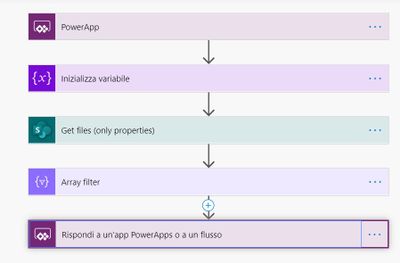 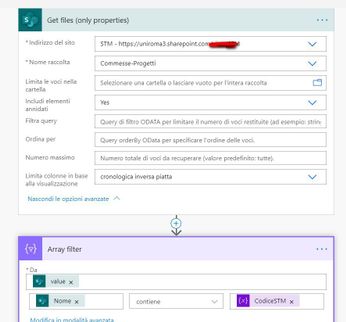 I don't be able to export the filtered data to my collection (and fill my gallery items).

I tried to use "Respond to Powerapps" but I don't see the variable to link to "result". 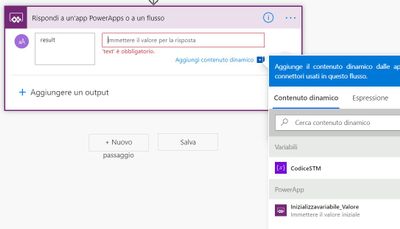 I found this problem with array variables and not with the string ones.

Please help me. Thank you in advance.

To transfer the result from the Filter Array action back to the PowerApps, you have to convert it into a format that can be sent back.

To transfer the result from the Filter Array action back to the PowerApps, you have to convert it into a format that can be sent back.

Helper I
In response to JohnAageAnderse
Thank you John.
I made an upgrade to this post adding the join function but I still have a problem to obtain a result.
Please look this new post if you can help me.
Thanks again
Daniele
https://powerusers.microsoft.com/t5/Building-Power-Apps/Get-file-property-from-a-share-point-documen...

Memorable Member
In response to ddf

The possible response formats does not allow you to pass back an array, so you have to JSON.stringify it first, then pass that back in the text response field.

In my flow I have received an array of items, which I then stringify (like with JSON) and pass the result into the response field "result".

In you PowerApps, when I invoke the flow, I set a variable to hold the response.

The variable is then used to fill my label with the result, which of course is still a stringified JSON.

You now have the result, just need to convert it into something that PowerApps can work with (JSON.parse) 🙂