I have created an application with profile pictures and here is the formula  :

how to solve this please

I'm guessing this is failing because the userID is empty or doesn't exist, not because there isn't a photo to display.  You can check and test for both using the userProfile and UserPhotoMetadata methods.

Perhaps add a label somewhere in the row that resolves the user id so you can see what it looks like;

Either way, try testing the userID before calling the O365 users method to make sure it exists, then check for the photo, then render;

Generally these days just making sure the user id exists is enough and you can still show user records that have no image without getting an error, so you can also try;

but if you're picking up errors with users that have no photo then try the UserPhotoMetadata() check as well.

Let me know how it goes.

how can I check UserPhotoMetadata(). you mean exactly?

This method should pull a record containing information about the user photo, whether or not they have a photo, without errors.  The record contains a field called HasPhoto which is true or false.

If you call this, it should tell you whether there is a photo or not before you try calling UserPhotoV2().

It's supposed to avoid errors when there is a user record but no associated photo to render.

If you call this by itself and get an error, then you need to check your userId.

Can you share some more about the controls you're using or some screenshots?

Are you using a Gallery, or a form or just controls on a page? 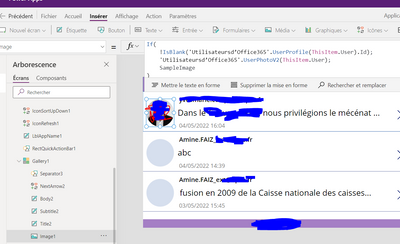 There is a similar thread which resolved the error by putting a if condition around the ID and then referring to the same ID in office365 connector.
https://powerusers.microsoft.com/t5/General-Discussion/PowerApps-Org-Browser-getting-error/td-p/5240...
but I don't know how I can adapt it to my situation thank you very much

I don't see an error on your screenshot?  Is it still not working?

Helper I
In response to JimmyWork

thank you for your efforts to help, i tried the solution of  @JimmyWork  and it works now