So I've been stuck for a few days attempting to import data from one environment to another. I've tried using dataflows (OAuth and Excel), one time imports through a number of spreadsheet formats, doing it from within the app, doing it from the environment editor, using the new and legacy tools, pretty much everything. Consistently, it always looks like it is going to work (I get to the part where I can assign mappings, and everything looks like it is where it should be) but then fails with the same{"error":{"code":"0x80040203","message":"Changing security attributes is not allowed in stage 20 plugins."}}. I'm not sure what I am doing wrong here, I have imported spreadsheets to dataverse before and it was not difficult. I can't think of any major changes made to our organization that would suddenly make data imports impossible.

All I can think of is there is some setting buried in a menu somewhere that is simply preventing any and all imports, maybe security roles, etc. I have myself checked as System Administrator, System Customizer, and Environment Maker. The import is to a table that is a carbon copy or the source (same solution).

Also, the Export to Excel option within the environment editor is also not working for me:

Export failed: There was an error adding a table to the project.
Any and all help is appreciated, I'm getting nowhere trying to figure this out.

I apologize, I completely forgot to update here.

MS support did help me. There was an errant business rule that was attempting to fire when importing data. Specifically, this rule was related to another issue I was having: assigning a record owner to "Administration" rather than the user who created the record. In short, I first attempted to reassign the record owner through a business rule, which will throw an error. I did figure out how to do this with code, but somehow this inactive rule was copied to my new environment (was supposed to be removed). Oddly enough, this seemed to affect ALL entities, not just the one with the rule. In general, I would say my experience with business rules has been rather poor, and I usually end up just writing code every time I try to use them.

I cannot say why this issue would prevent exports, but I can confirm that I no longer receive export errors since fixing it. halifaxious, I believe your issue may have a different solution, as I was always able to view data in excel (I just could not save edits). Maybe you are having a firewall issue? When I view data in excel from PA, it initially opens in Protected Mode, and will only display the data if I enable editing. If you are not receiving this prompt, I would start there with the troubleshooting.

Strange error, it seems perhaps there's a custom plugin step (at stage pre-operation) that is triggering and causing the error. Try looking at the plugins and temporarely disable any custom plugins to ensure it's not that causing the exception. The easiest way is to look at them with the Plugin Registration Tool (PRT) which is part of the SDK or the XrmToolBox: https://www.xrmtoolbox.com/plugins/Xrm.Sdk.PluginRegistration/. Look for any plugin that does not start with Microsoft.
More info on PRT: https://docs.microsoft.com/powerapps/developer/data-platform/tutorial-write-plug-in \

I tried your solution but unfortunately it looks like all the plugins are standard Microsoft assemblies, no custom anything there. I opened a support ticket with MS and spoke to them on Friday--as far as they can tell I'm everything correctly, so they are opening up a ticket on their end with another dpmt.

Kinda bummed to be stalled at this point, getting really close to being able to deploy something useful but can't really do it without getting this import stuff to work. Thank you for taking the time to read my post and suggest a solution for me.

Well still stuck here, haven't heard back from Microsoft after the first support meeting. Once again, any kind of data import activity, whether it be through a dataflow, and import through the legacy Dynamics interface, through the new Unified Interface, or even just manually editing data in Excel, all will always return the same error: "Changing security attributes is not allowed in stage 20 plugins." If anyone out there has seen this issue and resolved it please let me know what you did, my app progress has been dead in the water for weeks because of this.

I don't have any good reason to think this will help, but since you're dead in the water there's no reason not to try...

Look at your installed first-party solutions from the admin.powerapps console. From there, see if any of them have pending updates and install every update out there. Maybe you got a bad update at some point and just haven't updated it away?

if the ticket is not set as urgent Microsoft Support can take some time to respond. Try getting in touch or open a new urgent ticket. They’re pretty quick to response on urgent, but you always need to keep following up.

Thanks for the help guys. I will follow up with the support ticket this week and see where it's at. Fortunately I have plenty of other work to do around here.

Helper I
In response to cchannon

I want to try your idea but I'm a little lost. Are you referring to something in the power platform admin center or Microsoft.PowerApps.Administration.PowerShell, or maybe something else I haven't stumbled across?

Sorry I constantly find I'm learning something new with this platform every time I think I've got it.

Sure, from the admin.powerplatform.com UI, go to your environments and pick the one that's giving you trouble. In the lower Right, you will see a Resources panel. This will have various stuff in it, depending on the specifics of your environment, but you will probably see a "Dynamics 365 Apps" item in that list: 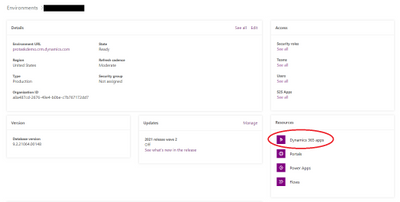 Click it and you will see a list of the first-party apps installed in your environment. If you are on vanilla Dataverse, this list will be small but if you are on a D365 org, it will be longer.

See if any of these apps are showing as "Update Available" or "Installation Failed" and if so, click on them to install the latest version of that app: 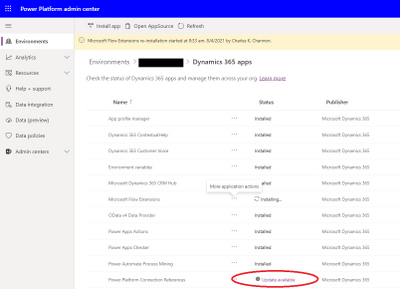 Helper I
In response to cchannon

Thanks I figured it was that. Everything looked normal there, but I decided to just hit install on Powerapps checker to see what happened (already said it was enabled). List completely refreshed with different items, one with update available so I will look into this and let you know how it goes.

Join us at PWR EduCon - A Power Platform Conference